This article provides a contextualized analysis of an important experience of public deliberation recently promoted by the Tuscan Regional Government and finalized to draft a regional law about the citizens participation to the public decision making. The empirical analysis focuses three main levels: how the deliberative arena was shaped; which model of dialogic and discursive relationships were put in place during the Electronic Town Meeting, adopted by the promoters as the central deliberative tool; which were the impacts of the participation on the decision making and the institutional process. The main research finding is that the process was not able either to be inclusive, nor to be discursive: it left out not only the ordinary citizens or those with a political orientation far from the regional government, but also the more active minorities, and it assumed the features of a consultation instead that those of a dialogic process. Moreover, the civil society involved in the process finally succeeded to be incisive on the public decision making only recurring to its political and relational resources, thus negotiating, instead that by means of a public deliberation. In sum, the representation of the whole process as a successful deliberative experience, addressed to the ordinary citizens, does not appear realistic. In the context of this Italian region, characterized by the "red political sub-subculture". The prevailing functions of the studied process seem to be its great symbolic value, as well as the fragmentation of the oppositional public sphere. 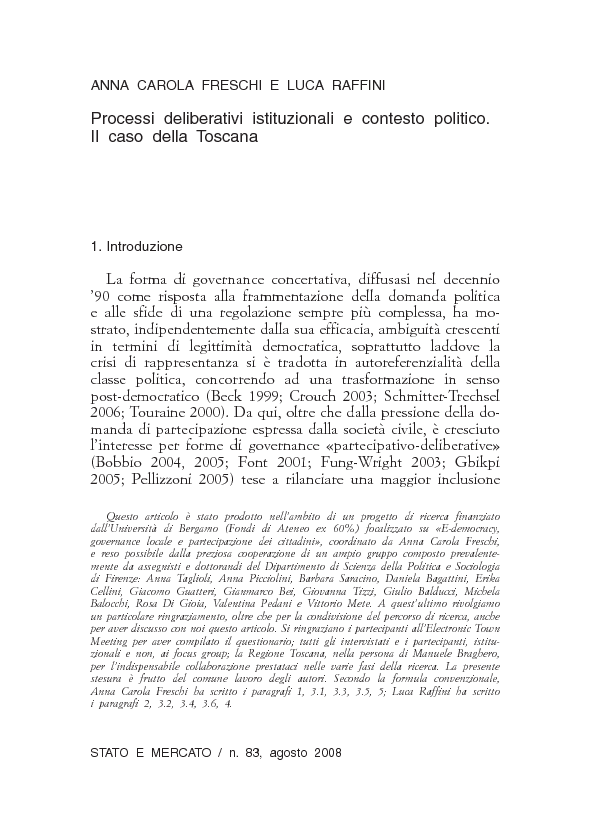