This paper starts from a mainframe inspired on C. Lindblom's theory (1977): big business and public decisions-makers had always had a privileged relationship. However, as an important variation from Lindblom's affirmations, the intervention of the State in Italy has not been addressed to satisfied all the requests of big enterprises. Its intervention has been characterised as a negotiation process orientated by the reciprocal advantages of both involved actors. We present a case study, the Fiat, to demonstrate this shifting from Lindblom's theory. Our analysis considers the evolution of public policies oriented to support the big car industry between 1980 and 2005. We'll show that its privileged relationship with the Italian State has been strongly maintained at least until the first years of the 90's: in each critical phase, the Italian governments had supported his national Champion of automobile sector. Nevertheless, in the context of Globalisation (the necessity to produce following best practices, continuity of innovation, placement in global markets) and Europeanization (respect of economic and financial parameters, State aids not allowed) this relationship started to be weaker. This had a negative influence - in a short term perspective - on the market capacity of Fiat, but on the other hand - in a long term perspective - it has constituted a positive sway for a revision of its management culture and of the competitiveness strategy of the automobile group: a way to warranting Fiat the exit from its worst crisis and the possibility of its international relaunching. 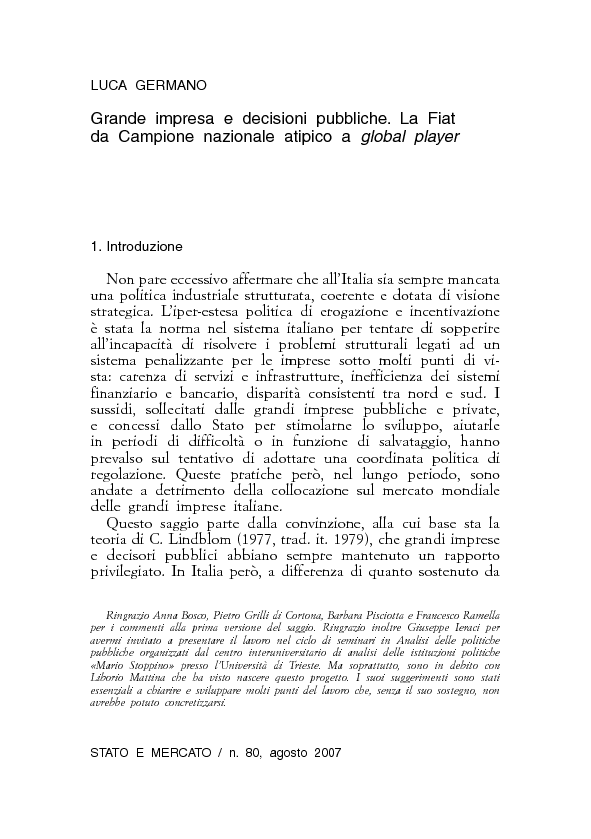