Several scholars acknowledge the emergence of new modes of socioeconomic regulation in cities, characterised by a gradual shift from welfare and redistributive policies towards more market-oriented and market-dependent policies. Harvey (1989) employs the concept of "urban entrepreneurialism" to illustrate the emergence of this new governance approach in cities, which places economic growth and territorial competitiveness at the top of the urban agenda. With respect to this shift, numerous studies emphasise a growing contradiction between "urban entrepreneurialism" and social justice, showing the existence of a generalised tendency toward greater social and spatial inequality within contemporary cities, even under conditions of sustained economic growth. According to this view, an inevitable trade-off between efficiency (economic growth) and social equity characterises urban development processes. By contrast, the idea of this paper is that the search for economic growth and social objectives are not necessarily in conflict. Local regulation mechanisms may, in fact, contribute to strike the right balance between economic growth promotion and the creation of a just city. This hypothesis is tested through the examination of urban development processes and policies in Barcelona. To a large extent, the case of Barcelona shows that economic growth promotion and social enhancement are not mutually excluding objectives in urban development strategies, emphasising the role that local socio-economic regulation systems may play in supporting their coexistence. 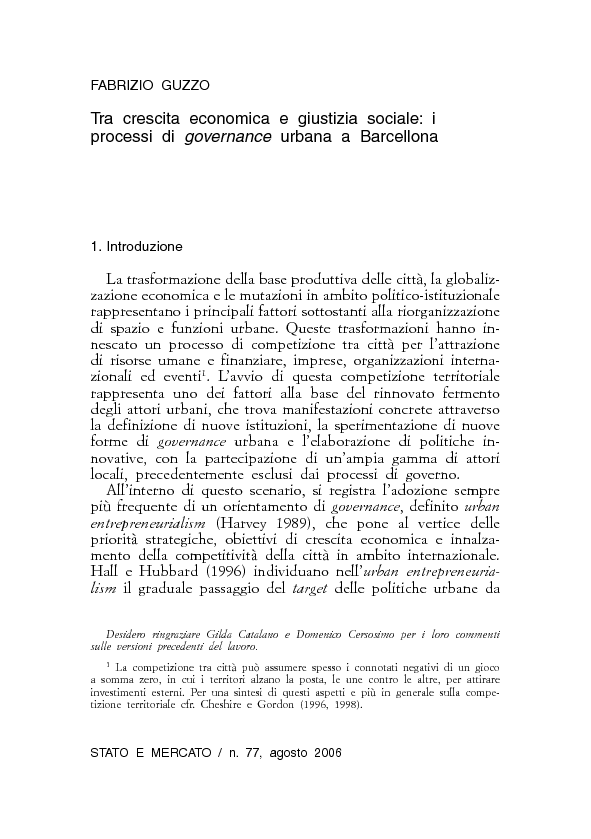