The paper in neatly divided into two parts. The first one is an accurate report of the parliamentary discussion of an important piece of labour legislation: the re-definition of the legal framework of one category of a-tipical labour contracts, those partaking some aspects of both dependent and independent labour, the so-called "collaborazione coordinata e continuativa". Since the boundaries of these contracts with dependent labour are now fuzzy, and they are both less expensive and more flexible than the traditional contract of dependent labour, the growth in their use by the firms in recent years has been staggering. The bill failed to be passed by the Parliament because of divisions inside the majority. The drafting and the discussion of this bill, though interesting per se, is taken as an example of the minor role of (labour) economists, vis-à-vis (labour) lawyers, in the legislative process leading to an important piece of reform of labour legislation. The reasons for this different role of lawyers and economists are discussed in the second part of the paper. Several reasons are discussed, including that such a minor role might only be a (false) impression of the author, who is a labour economist and was a M.P. in the previous Legislature. Leaving aside the example of part one, the old general question of the interactions between "experts" and "politicians" is dealt both in general items and with those details the only inside knowledge can provide. 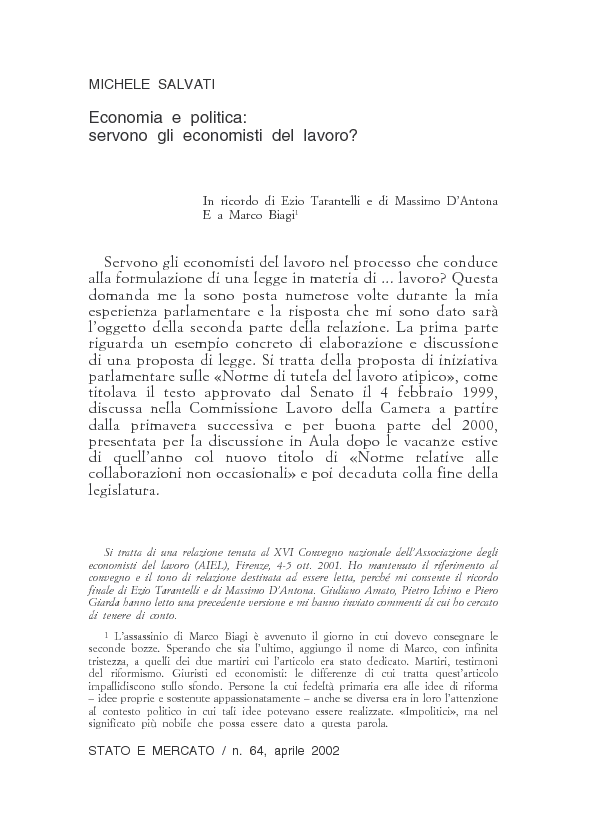