Italy stands as one of the weakest members in the EU for its unstable macroeconomic conditions and public indebtedness. At the same time, the country experienced a booming gambling market, which now ranks first in Europe and forth worldwide. So far, the economic literature has largely overlooked the drivers and likely effects of the Italian boom. Conventional explanations follow the «captured» rhetoric of the policy-maker and the industry: the boom would be a statistical illusion (registering the mere passage from black to legal gambling), and the sector would be an inevitable contributor of fiscal revenues and GDP (without mention of crowing out effects). Adopting an interdisciplinary approach, we study empirically the medium-term market dynamics, by exploring its main economic, social and institutional dimensions with an original combination of official statistics and third-party evidence. The comparative statics analysis uncovers a few main results. First, the Italian boom builds on the creation of endogenous growth mechanisms, self-sustainable. On the supply side, the continuous growth of gambling gross expenditures was activated by institutional and technological shocks (iper-liberalisation and ICT), that multiplied productive capacity and increased its spatial and temporal accessibility for the entire population. Moreover, gross expenditures were enhanced by aggressive marketing strategies (in primis, the expanding number of «micro-wins»), which augmented gambling risks and addiction. Concerning the demand side, its cultural legitimation (normalisation) and mass activation were elicited by the capillary diffusion of the gambling sites, while the usual psycho-social drivers of gambling were reinforced by contextual factors. First, Italian disposable income did not recover after the post-2007 crises. Second, the economic decline triggered expanding poverty and widening socioeconomic inequalities, which reinforced the blockage of social mobility mechanisms. This context pushed a growing share of population to rely on gambling odds as a compensative mechanism, while a series of financial factors have enabled the growing indebtedness of households with risk and problematic gamblers. Concerning the likely effects, we characterise the dominant financial nature of the gambling boom and the frequent infiltration of organised crime. Then, we detect original inter-sectoral effects of real and financial crowding out, so far neglected, whose full measurement calls for new open data and science. Finally, we recall that households debt and socioeconomic inequalities have been recently discovered as sources of systemic instability and macroeconomic crises. Implications for non-captured regulation oriented to a serious containment of gambling supply are finally derived. 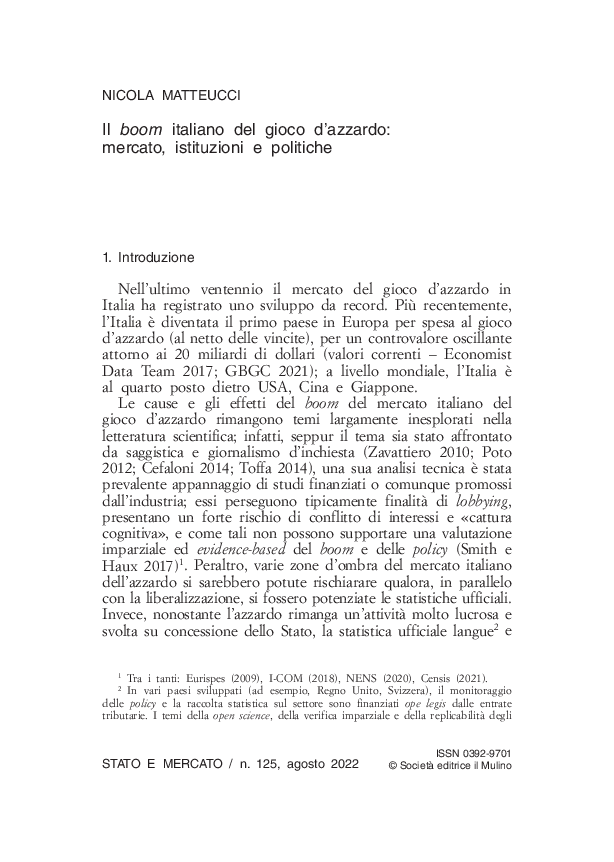