The article deals with the policy consequences of populist actors in office and the conditions conducive to policy outputs in line with their positions. It does so by focusing on the under-researched variant of inclusionary populism and the ways in which inclusionary populist parties, after entering government, addressed the demands of unrepresented categories of workers, such as food-delivery couriers in the platform economy («riders»). Empirically, the article investigates the cases of Podemos in Spain and the Five Star Movement in Italy, and their participation in the policy process that led to the adoption of the so-called Ley de Riders and Decreto riders, which modified the dispositions about the employment and social protection of food-delivery couriers in inclusionary terms. The article analyzes the role of the two parties and the main factors that drove the policy process from the agenda-setting phase to the adoption of the new legislation. Methodologically, it relies on 10 semi-structured interviews with experts and policy actors who directly participated in the formulation of the two decrees. Interviews were complemented with the analysis of academic articles and experts’ commentaries, to investigate the policy content of the two legislative texts, and newspaper articles, to retrace the policy process. The article finds that the two inclusionary populist parties, once in office, promoted and achieved inclusionary policy outputs in relation to riders’ working rights, conditionally to the support of centre-left governmental allies and the active involvement of social partners 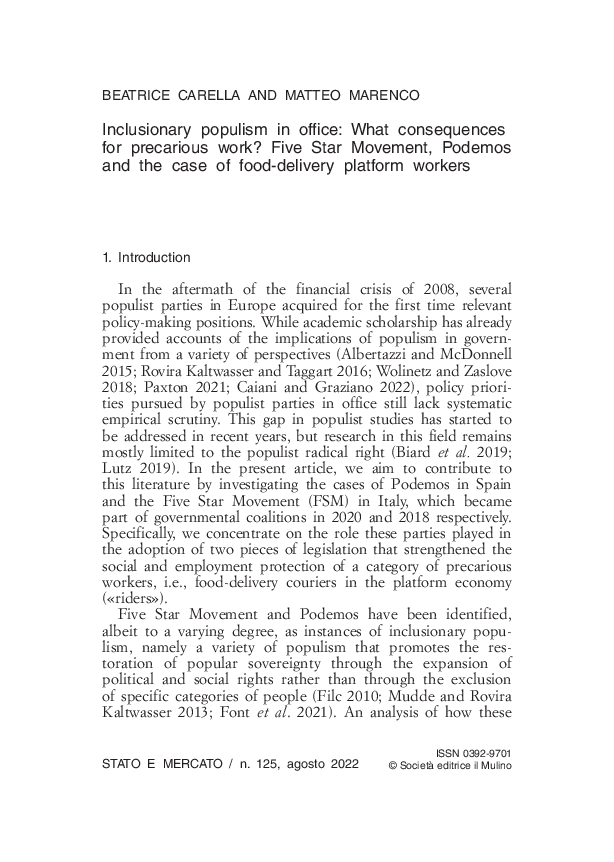