Italy has long been considered the «real sick man of Europe» because of the dramatic drop-off in its economic growth. However, thanks to the country’s unexpected ability to respond to the pandemic crisis, how Italy is perceived internationally was completely overturned in the course of 2021, so much so that it was hailed by The Economist as «country of the year». The argument we will present in this paper is that Italy now stands at a true «critical juncture» which provides a chance to relaunch the country’s economic and social growth, taking a high road to development. This is something quite different from a mere rebound after the pandemic crisis. It entails a more structural attempt to correct Italy’s growth model that got under way after the Great recession of 2008-2013. Today, a new window of opportunity has opened for this attempt. We will concentrate in particular on the Italian national innovation system (NIS), doing so for two reasons. First, the capacity to produce innovation is now considered one of the keys to competitiveness. Second analyzing the changes that took place in the NIS between the two crises can enable us to identify the main «critical antecedents» leading to the critical juncture. Alongside these antecedents, we can also see a profound shift in the climate of opinion: Italians are now more optimistic about the future, and in particular about the twofold transition – technological and green – that is now under way. These are the factors that, together with the flood of resources now available through the Next Generation EU package and the National Recovery and Resilience Plan as well as the agency of institutional entrepreneurs, can create the permissive conditions for embarking on a new development path, although where this path will lead is still hard to predict 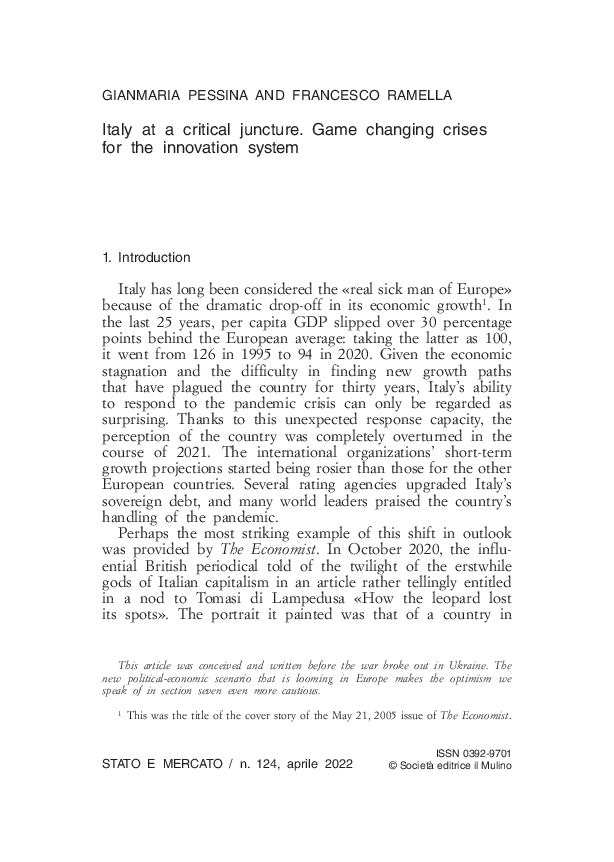