Changes in the family-work gendered arrangements occurred in all developed countries during the past forty years. They involve the changing balance between care needing and the availability of potential carers, on the one hand, changes in labour market opportunities and constraints on the other hand. Italy, within the EU, is the only country, together with Greece, not only with the lowest women’s employment rate but also with the largest gender gap. This is the result of the complex intertwining of the gender division of labour within the family, characteristics of the labour demand, which is itself structured by expectations concerning gender and age, and welfare arrangements. This article focuses on changes in the Italian work-family system and the role of welfare state, looking at those policies that directly or indirectly interfere with the work-family balance and its gendered dimensions. Comparing Italy with Continental countries, such as Germany as well as with a «familialist country» such as Spain, this article concludes that Italy is (still) characterized by a lower degree of de-familialization of care, with respect to both childcare and long term care and by a lower investment in family policies in general and in work-family policies in particular aimed at supporting women’s employment and at degendering family caregiving. Nevertheless, this article shows that four family policy paradigmatic shifts can be dectected, which suggest that the policy landscape in Italy is no longer «totally frozen». The pandemic crisis, it is argued in the article, while worsening the already insufficient work-family conciliation policies and mothers’ labor force participation, also made them visible as an equity and policy issue, which entered partially in the political agenda 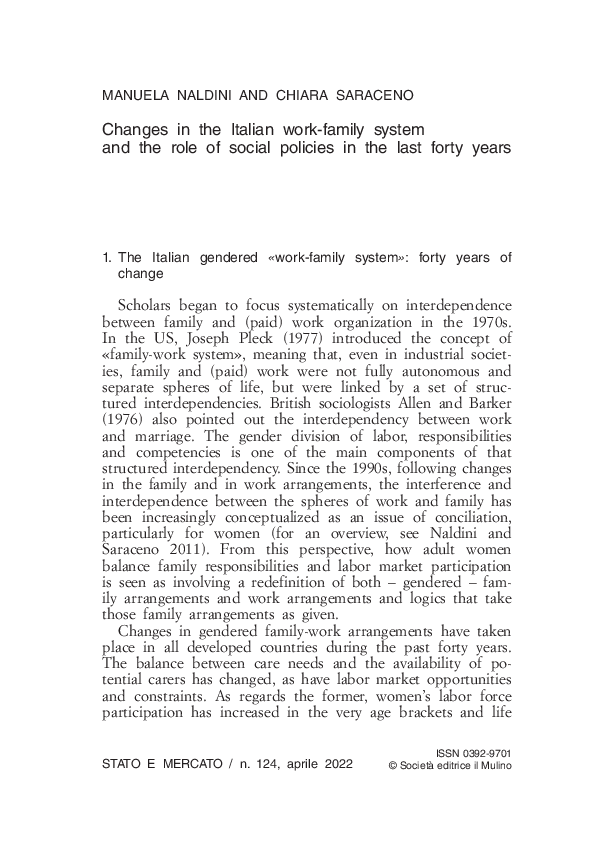