In the last twenty years the Locally Unwanted Land Use (LULU) protests have grown across Italy by putting scholars in front of new questions about the dynamics of local mobilization which have often led them to focus on the political-institutional context as pivotal variable to explain the conflict. By starting from this assumption, this paper aims at observing, on the one hand, the transformations of political context (the arise and decline of Movimento 5 Stelle, the centralization of power related to territories management, the tightening of repression, etc.) that have produced a Political Opportunity Structure unfavourable for LULU mobilization and, on the other hand, the feedback of local actors and their reorganization in terms of frame and strategies. While paying attention to structural dynamics, this paper investigates the role that the cultural-discursive context and the local actors’ framing processes play in mobilization. With this aim, the contribute takes in consideration the spreading of new environmental movements – as Fridays for Future – and the discursive and political opportunities that these can produce also for the local campaigns here analysed. The research is been conducted by comparing three LULU campaigns (No Grandi Navi, No Cave, No TAP) and by using a qualitative approach mainly based on in-depth interviews with actors of the conflict and on the analysis of documents that they have produced. 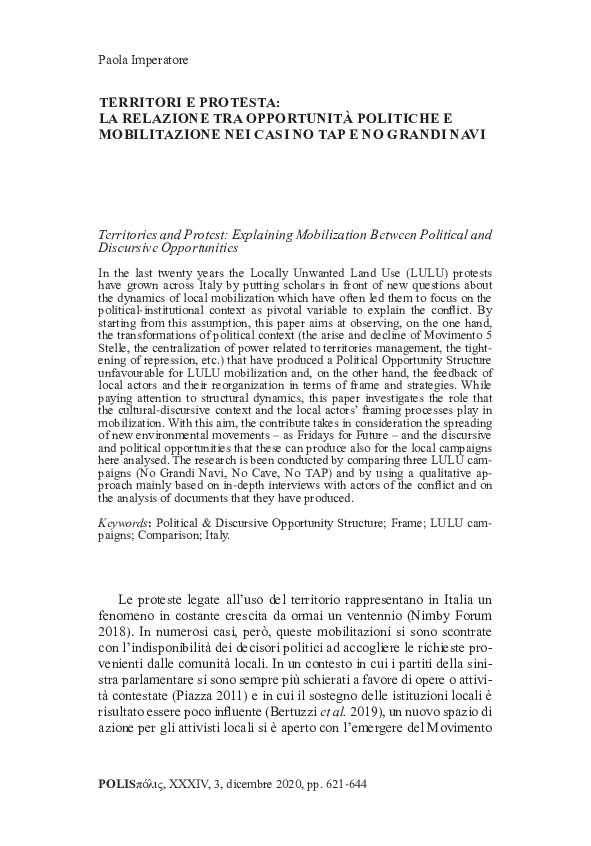