The results of the 2018 General Election stimulated a new discussion in the political and social sciences on the link between socio-economic conditions and voting behaviour, and many observers have sought to understand the rising electoral fortunes of parties which strongly contest the management of crises in recent years. In methodological terms, these shifting scenarios underline the need to identify new variables and categories – or new ways of using existing ones – with a view to understanding the situation of voters and the areas in which they live. This article forms part of this strand of research and aims to provide an empirical overview of the transformations that are in course. The authors draw on concepts related to the dimensions of vulnerability and social composition in order to identify three distinct types of periphery: urban, periurban and rural. They hypothesise that different electoral outcomes are observed in these different kinds of areas, which are more or less favourable to political formations which challenge the traditional political parties. The study relates specifically to the Campania region, which comprises disadvantaged urban neighbourhoods and rural areas characterised by isolation and demographic decline. The article also explores the role of cultural factors and the attractiveness of individual candidates, demonstrating that it was mainly in the urban and periurban peripheries that the 5 Star Movement emerged as a dominant political force in the 2018 election. In the rural periphery, by contrast, voters resisted the wave of contestation of existing parties, at least in part, responding in different ways, compared to those in the urban peripheries, due mainly to differences in the socio-economic and political configuration of these different areas. 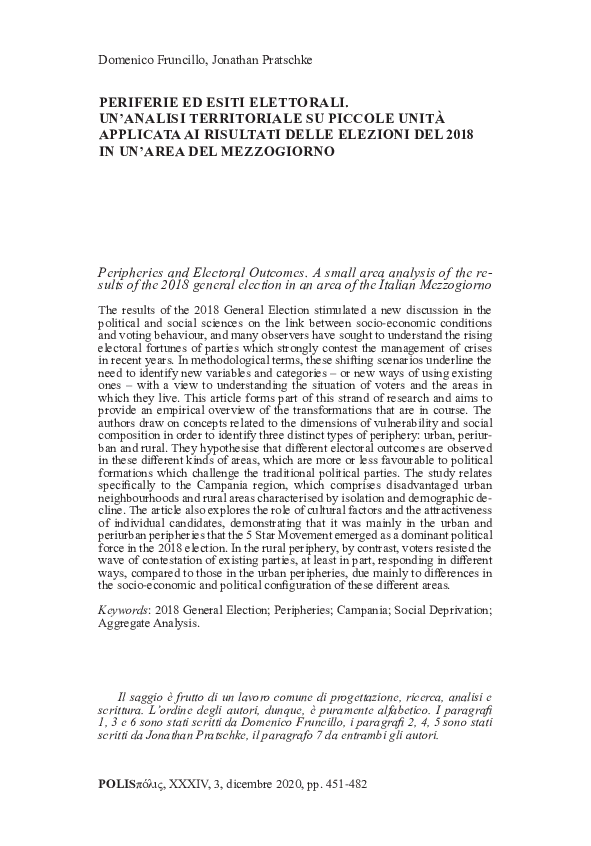