Electoral studies in Italy boast a remarkable research tradition based on territorial studies. As it is well known, over the years the municipal, regional or macro- regional level has been privileged. Recently, the decline of geopolitical areas (white and red) has led to favouring other approaches, often based on survey data. More recent contributions have instead tried to shed light on the relationships between socio-economic variables and voting using the sub-municipal level. In this line of research, this article aims to verify the presence of electoral trends at sub-municipal level with reference to the cities of Genoa, Milan and Turin, and also proposes to advance some explanations on their causes starting from the cleavage «losers/winners of globalization». The analyses on the electoral trends in the three municipalities were carried out using the data of six elections: parliamentary 2008, European 2009, parliamentary 2013, European 2014, parliamentary 2018 and European 2019. The electoral results obtained by parties were correlated with a disadvantage index built from Istat data, using the statistical areas into which the territory of the three municipalities is divided. The article shows how the choices of the voters are still dictated by the presence of territorial divisions, however operating at sub-municipal level, less lasting than traditional sub-cultural divisions and based on socio-economic elements. 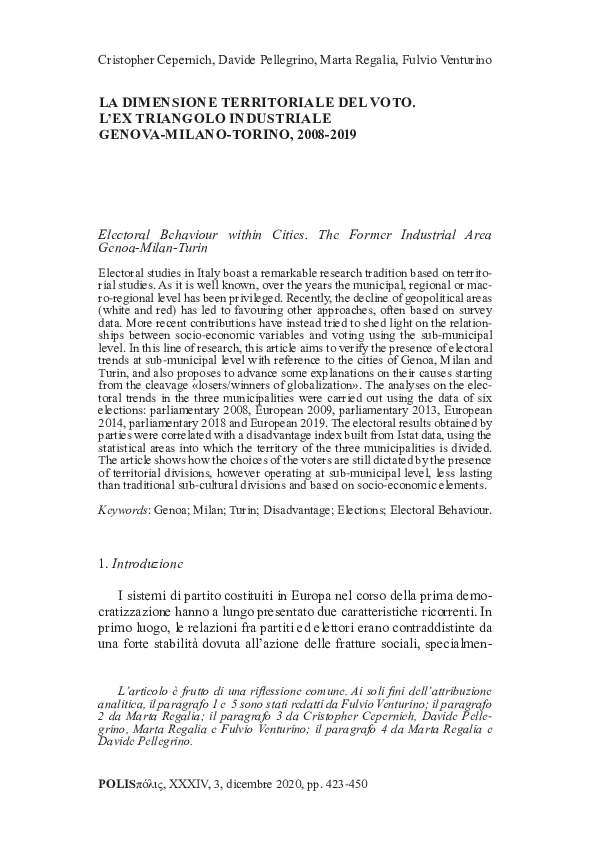