This study aims to assess whether a gender gap in voting behaviour for populist radical right (PRR) parties in Europe exists, and explores various determinants of gender bias. Hypotheses concerning ideological attitudes such as chauvinism, authoritarianism, economic redistribution, and attitudes towards gender equality, as well as socio-demographic factors, are tested using European Social Survey data (2016-2017). The analysis first discerns the extent of the gender gap, then evaluates the differences in the determinants that shape support for such parties based on gender. Relying on logistic regression analysis, the re¬search shows the existence of a significant gender gap in Europe and also, that while chauvinist attitudes increase PRR voters’ support, championing gender equality lowers it. Moreover, the study finds mixed support for the main explanations proposed by the theoretical literature to explain such a gap – such as chauvinist attitudes. If the emotional attachment to the nation is significant in explaining the divide among women and men in the vote for populist radical right parties, holding anti-immigration attitudes is not. Finally, it illustrates that women supporters of PRR parties are more likely to be younger and undertake domestic tasks. 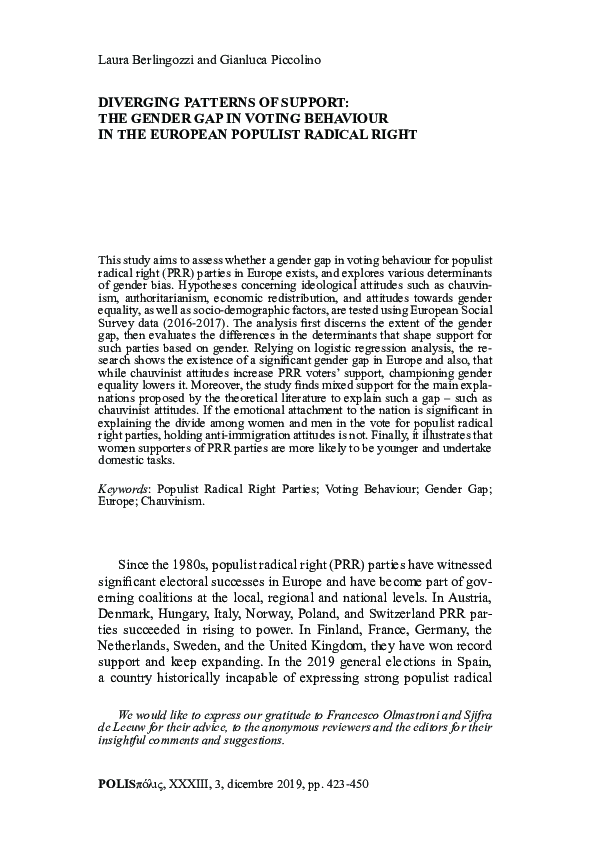