Gender disparity in academic careers is a global phenomenon, although the causes and consequences vary in different national contexts. The article focuses on the «leaky pipeline» effect (women are less likely to receive tenure and more likely to leave academic career). The literature accounts for gender inequalities in early stages of career with two different types of explanations: 1) mechanisms of individual «self-selection» (discouragement, less competitiveness, family orientation, etc.); 2) employers’ gender bias and discriminatory behavior. Less attention is given to those social processes that look at gender as a «social structure», that is to the structural and cultural factors that operate at various individual, cultural and social levels (micro, meso and macro) and which are produced and (re)produced at various stages of academic career and over time (recruitment, retention and advancement). Based on the ISTAT survey on PhD holders (2018 and 2014 editions, N=32 thousand), the paper analyzes the gender gap in Italy in the probability of accessing the world of academic research (universities or public research institutes) after obtaining PhD, with a post-doc or assistant professor, in both «hard» sciences (STEM) and in human and social sciences (SSH). The analysis yields three main findings: 1) while the gender gap is almost absent in post-doc positions, it re-appears quite evidently in assistant professor positions; 2) the gender gap in assistant professor positions is stronger in some, but not all, STEM disciplinary groups, while it is weaker in all SSH groups; 3) the gender gap does not depend on gender differences in scientific productivity. 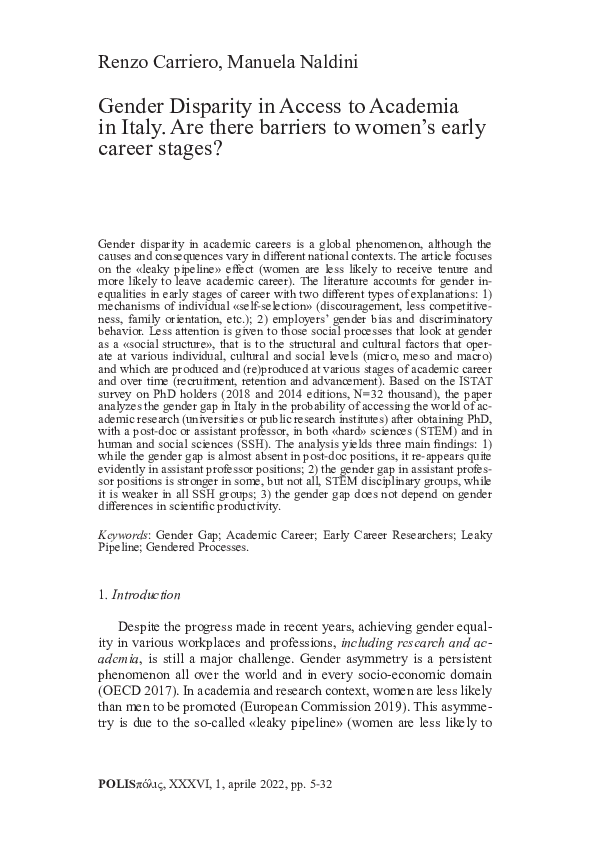