Drawing on the debate about how feminist issues have increasingly been invoked in neoliberal and conservative discourse (Stacey 1983; Eisenstein 2005; Fraser 2013; McRobbie 2013; Gill 2007; Rottenberg 2014; Schreiber, 2008; Banet-Weiser 2018; Banet-Weiser et al. 2019), this paper addresses how women-related themes are mobilized in the discourses of Italian right-wing female politicians. By combining content analysis and feminist political theory, we provide an in-depth reading of the public statements by three current and former right-wing MPs at the forefront of their parties: Giorgia Meloni, Daniela Santanchè and Flavia Perina. Despite some clear differences, the discourses of these three MPs regarding Italian women’s conditions are representative of how feminist issues can be addressed in conservative neoliberal and nationalistic terms, especially in a context characterized by the overt role of the Catholic Church in political matters and widespread agreement on natural sexual difference (Garbagnoli 2017). Our sources are their discourses on «women» as reported in: 1. the LexNex full-text newspaper dataset during two parliamentary terms (29 April 2008 – 22 March 2018); 2. their authored books on women and/or gender issues. Our inductive analysis of their discourses on three topics related to gender issues (interpretations of sexual difference and second-wave feminism, women’s role in the family and in the labour market, and reproductive rights) will shed light on both their «righting» of feminism (Farris, Rottenberg 2017) and their misrepresentations of it. Our discussion of these data will show that the lack of real critique of the sexual division of labour and of essentialism within neoliberal and social democratic traditions in Italy has allowed for certain ostensibly liberal elements to be added into the right’s discursive field. In particular, we will show that one pervasive theme in their arguments is that a low fertility rate is the main problem of Italian women. This induces all of the female MPs to uphold what we term emancipatory complementarism, a mix of liberal and conservative elements that generates incongruities and internal contradictions. Ultimately, we argue that emancipatory complementarism, in its being a conservative political strategy, is at odds with feminist projects of structural transformation. 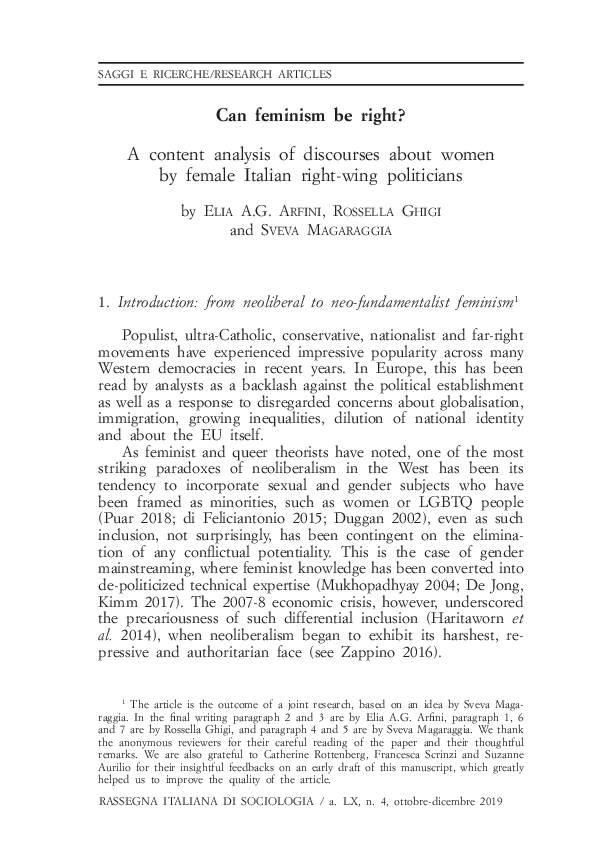