This paper aims to analyse transnational families from a not common point of view: the emotional dimensions on stage in transnational mothers' and fathers' accounts. International literature seldom analyses emotional costs on migrant men (Montes 2013), hardly represented as fathers. The transnational fatherhood is, in fact, with a few exceptions (Abbatecola 2010; Carling and Schmalzbauer Menjivar 2012; Dreby 2006) generally invisible to the eye. The attention to female first-migrants, by contrast, seems mostly focused on the absence of mothers (Ambrosini 2008; Lagomarsino 2006), crushed by processes of scapegoating - strangers to the fathers (Parrenas 2004) - that seem to emerge in the accounts as subjective emotions. The purpose of this paper is, therefore, to give visibility to the emotions narrated by transnational fathers and mothers, drawing from the results of a qualitative study: 30 life stories of transnational parents from Ecuador and Peru (20 mothers and 10 fathers with children at home or reunited in the four years preceding the interview) and 5 semi-structured interviews with key informants. More specifically, I intend to develop the article along three main paths: The differences between emotions narrated by transnational mothers and fathers with respect to different aspects of parenting at a distance (separation and meeting; reconstruction of the relationship after long gaps); The emotions that you can not tell in the light of an emotional culture (Gordon 1981) whose emotional codes are strongly characterized from the point of view of gender (mother's disaffection and freedom to leave children as a choice); The emotions of researchers as a reaction of emotions narrated, also not neutral with respect to narrator's gender. 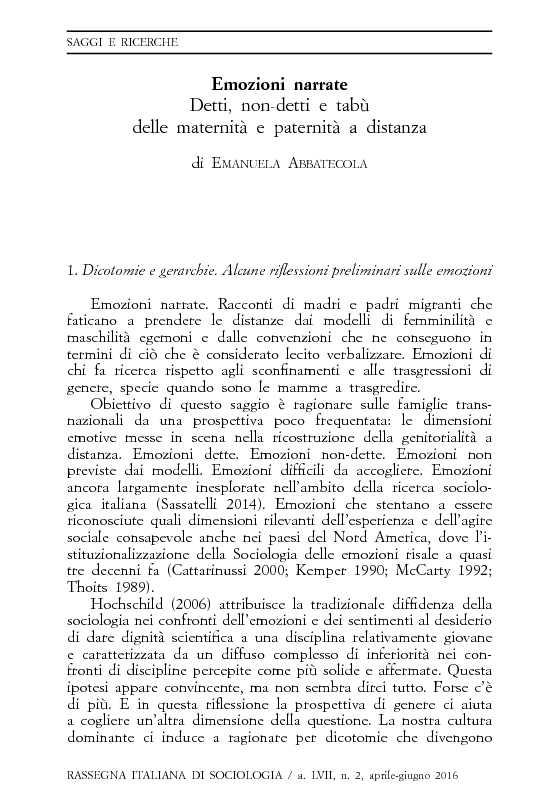