The controversy on the energy matter is emblematic of two phenomena: in contemporary democracies, we find plans of emptying some of the democratic institutions, clashing with attempts of re-appropriation of spaces of democracy from below: on the one hand, the deficit of social and cultural legitimacy suffered by political institutions, on the other hand, the design of "confiscation of democracy" in which the policy maker tries to counteract prior instances of deliberative participation advanced by the public opinion. Virtually ignored by mainstream media, the debate on nuclear power has been in the middle of a dense network of conversations from below, which eventually affect public opinion. The success of the referendum on the nuclear issue enshrines the internet as an alternative political engine and, at the same time, a tool of "self-summoning" for the citizens, beyond the traditional forms of political mediation and communication media. By comparing data on old and new media, it's shown how networked conversations have ended up conditioning the media agenda and affecting the public opinion by the conveying of values and interests once alien to the interpretive framework in which the case was politically orchestrated. The still unresolved issue concerns the affinities and semantic break between old and new movements in terms of communication strategies used to achieve consensus and to overturn the status quo. It remains to understand how the media platforms will transform themselves to meet the challenge of energy emitted by these social forms of civic engagement. 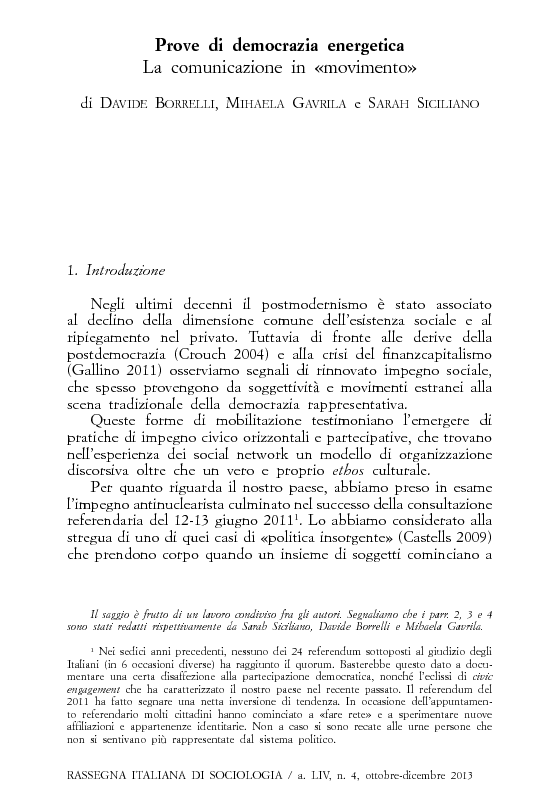