According to the theory of reflexive individualisation, in the conditions of high modernity the body becomes a never-ending reflexive project. In this paper I discuss the limits of this view of action, reflexivity and embodiment. I argue that it relies on some form of body/mind dualism, it is not enough sensitive to the limits to reflexivity imposed by the very fact that our practices are embodied, and it might take what are normative claims about subjectivity for the whole practice of subjectivity constitution. In order to account for both structure and agency I try to develop a three-dimensional model for embodiment as articulated in a socio-genetic dimension (Bourdieu's "habitus"), a situational-experiential dimension (Goffman's organisation of involvement) and a normative-institutional dimension (Foucault's discipline). I critically combine these different dimensions using fitness regimes as an example. Contrary to what theories of reflexive individualization imply, regular participants in fitness seem to become reflexive risk-managers only because they are pushed and pulled to loose themselves in the actuality of physical activity. Similarly they can reflexively construct themselves as the authors of choices only because they have learnt to want certain things as locally prescribed. Power, in other terms, works through locally organised and embodied forms of knowledge whose contingent, ongoing realisation also allows for spaces of change and resistance. 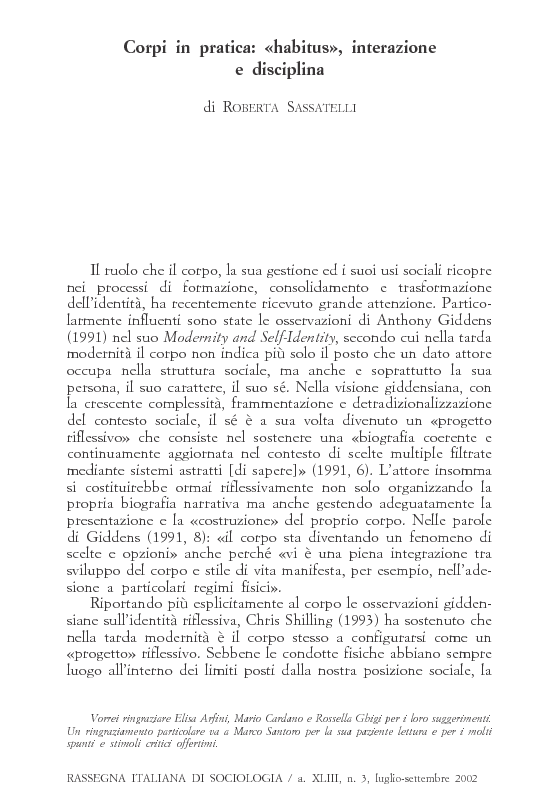