This paper aims to reflect on the conversations which take place in so-called «third places» (Oldenburg 1991; 2000), i.e. the middle spaces between the professional and family life, characterized by an informal level of sociability, in which people have the opportunity to engage in spontaneous forms of communication on various topics. For the peculiarities we discuss in this paper, we consider the coffee-house gatherings as the ancestors of the currently social networking sites. Based on the social shaping of technology approach, we have analyzed some of these online third places, questioning how the public sphere can deploy and adapt within those spaces. The sociability and the public sphere can be considered as types of conversations that intertwine with each other in the ordinary communicative practices; they have objectives, contents and functions, which encourage the emergence of one type of conversation or the other, in places where they intersect. After regaining the public sphere, drawing in particular some of the key elements of the theories of Habermas (1971), we will try to explain that the success and the growth of environments, which enable forms of interaction through the Net, are not merely a phenomenon related to technological developments. Instead, they may be related to their ability to accommodate forms of sociability that the social actor has historically been seeking and building in the third places. Although these widespread online environments allow space for discussion of otherwise marginal matters, they seem to highlight issues related to the concept of public sphere itself, as they are still unable to form a new complex and heterogeneous one, which can also have political relevance. 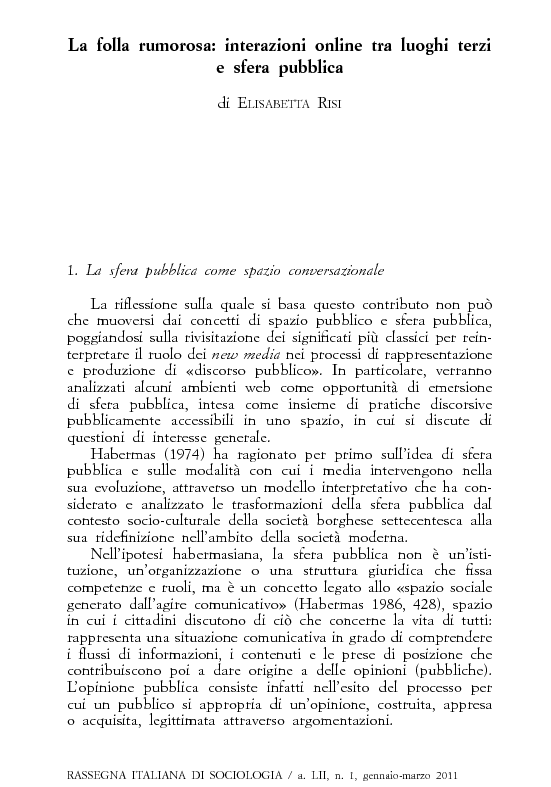