The transition to post-industrial economy had strong social consequen¬ces, on cities in particular and in advance. The international debate tackles the negative effects of the economic change on the living conditions of di¬sadvantaged social groups. This paper aims to contribute to the debate on post-industrial transition, analysing survey's data on Milan, Rome and Naples, which show different impacts of economic development on social inequalities and social change. Some of the main issues of current sociological discussion are also tackled: individualization and work instability/precariousness. Milan and, to a lesser extent, Rome offer more possibilities to be employed and to find qualified jobs than Naples. Post-industrial transition entailed an increase of differentiation between Italian Northern-Central and Southern urban areas. Nonetheless, the social mechanisms of class and social inequalities reproduction are very similar among Italian urban areas and aren't reduced by economic development. Employment instability changes the traditional social inequalities, combining old and new cleavages. Unstable jobs have spread throughout the society, but affect in particular people of lower education and women, the main actors of social change in Milan and Rome, whereas in Naples - with the exception of graduate women - they remain mostly out of labour market. The decline of the industrial pattern of «stable-employed male breadwinner» has increased social and economic risks of weak social groups. According to the data individualization approach cannot be confirmed, at least within the sphere of work and economic perception: the «individualized» biographies don't have a diffuse influence on actor's self-perception. 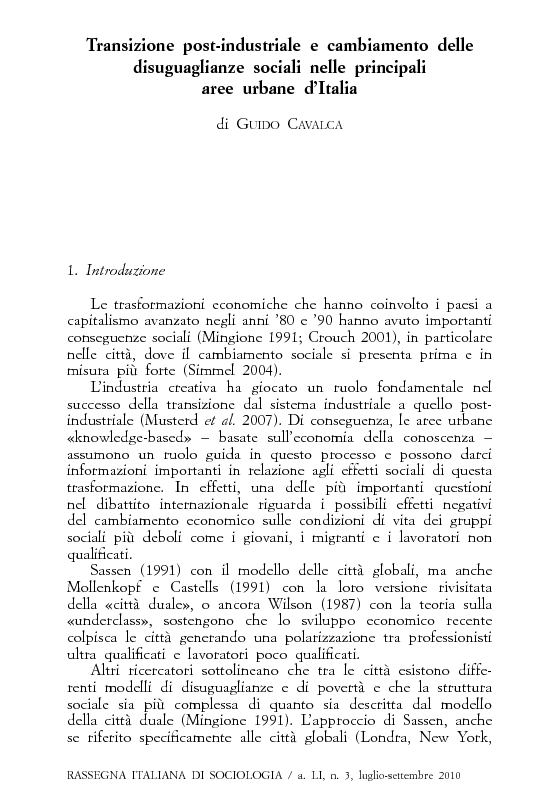