This paper focuses on the sense of (in)security, (un)safety, (un)certainty of the Italian citizens. During the last few years, the feeling of social insecurity has become a central matter in the perception of Italians. The "syndrome of fear" involves different representation of social life: the uncertainty toward the future and, more generally, about the life itself; the risk for the personal and familiar un-safety. People who feel a higher degree of "fear" have a fairly specific social profile. It is more likely they are aged, living alone, in the Northern region, in particular in the degraded district of the larger cities or in the small peripheral towns. About their attitudes, they do agree criminality issue is strictly linked to the immigration presence; they have a higher level of mistrust on political institutions; they show a right wing orientation and feel close to Northern League. All of these social traits contribute to shape the "fear syndrome", but, no one is strong enough to explain alone the feeling of social insecurity. Beside the "internal" factors mentioned above, some "external" variables have played an important role: 1) the economic and social costs to enter the European Monetary Union "become" heavier for citizens, once Italy was a member, and they have turned out to be more reactive to them; 2) the crisis of centre-left government has opened again a phase of political unsteady, making deeper the sense of disappointment toward the party system; 3) the rising of crime rates and the growing of immigration phenomenon; 4) the Northern League, which has turned its political discourse into the relation between immigration and criminality; 5) the media campaign, which stresses on criminal and illegal events occurred in Northern cities and on the growth of the immigration presence. 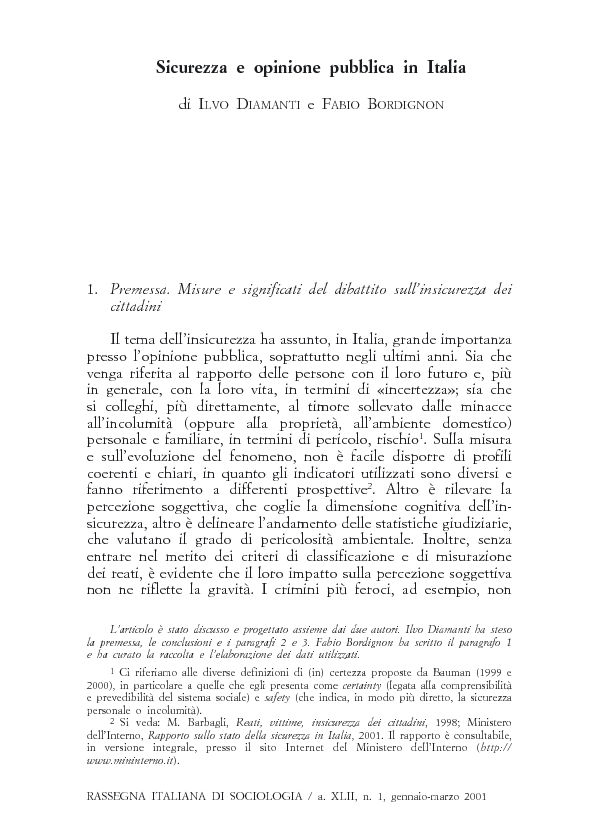