Based on a deep ethnographic fieldwork carried out between 2002 and 2018 in Warsaw, Gda`nsk and Rome, the article analyses the making of resemblance as a family practice, which through embodiment processes defines in a relational and situational way who the kin are, and the relationships between them. The paper first reviews how Morgan’s theory has encountered profound changes in the anthropology of kinship and in the family models in contemporary societies. It shows how the social sciences have studied family resemblances, and calls into question the opposition between naturalism and constructivism. Then, the article outlines four bodily grasps by which family resemblances are made and unmade: the body as archive, which connects the substances of blood and genes to a land and a history; the sensitive body made up of feelings and materiality; the processual body, which inscribes the person over time in an age, a gender and a generational position; the body that is dramatized into words and pictures. Finally, the paper stresses how these findings shed a new light on the European kinship and personhood. First, the different forms of embodiment unveil the great variety of family forms in Italy and Poland, and particularly the importance of affinity and relatedness. Second, the production of kinship by similar bodies that are neither irreducibly different nor identical constitutes a mode of making personhood, through a complex interweaving of social components. Thus, the making of family resemblances displays the strength of relational ideas about personhood, which match and temper the very rhetoric of individual singularity 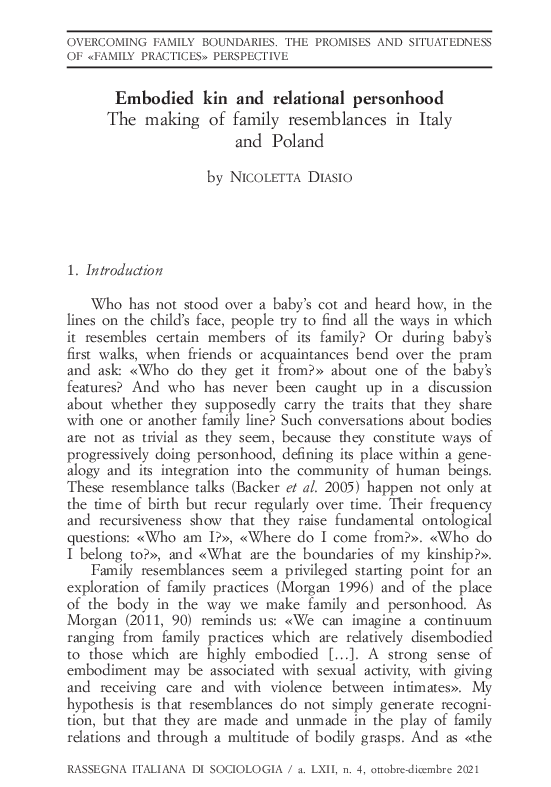