According to some author, when researchers are called to express a judgment over their peers, they might exhibit an epistemic bias that make them favoring those who belong to their School of Thought (SoT). A dominant SoT is also most likely to provide some advantage to its members’ bibliometric indexes, because more people potentially means more citations. In the long run, even the slight preference for one SoT over the others might lead to a monopoly, hampering the oft-invoked pluralism of research. In academic recruitment, given that those who recruited to permanent position will often become the recruiter of tomorrow, such biases might give rise to a self-reinforcing loop. However, the way in which this dynamic unfolds is affected by the institutional infrastructure that regulates academic recruitment. To reason on how the import of epistemic bias 19 Carlo Debernardi, Dipartimento di Lettere e Filosofia, Università degli Studi di Firenze, via della Pergola 60, 50121 Firenze, carlo.debernardi.w@gmail.com Eleonora Priori, Dipartimento di Economia e Statistica Cognetti de Martiis, Università degli Studi di Torino, Lungo Dora Siena 100 A, 10153 Torino, priori.ele@gmail. com; Collegio Carlo Alberto, Piazza Vincenzo Arbarello 8, 10122 Torino. Marco Viola, Dipartimento di Filosofia e Scienze dell’Educazione, Università degli Studi di Torino, via Sant’Ottavio 20, 10124 Torino, marco.viola@unito.it changes across various infrastructures, we built a simple Agent-Based Model using NetLogo 6.0.4., in which researchers belonging to rival SoTs compete to get promoted to professors. The model allows to represent the effect of epistemic and bibliometric biases, as well as to figure out how they get affected by the modification of several parameters. 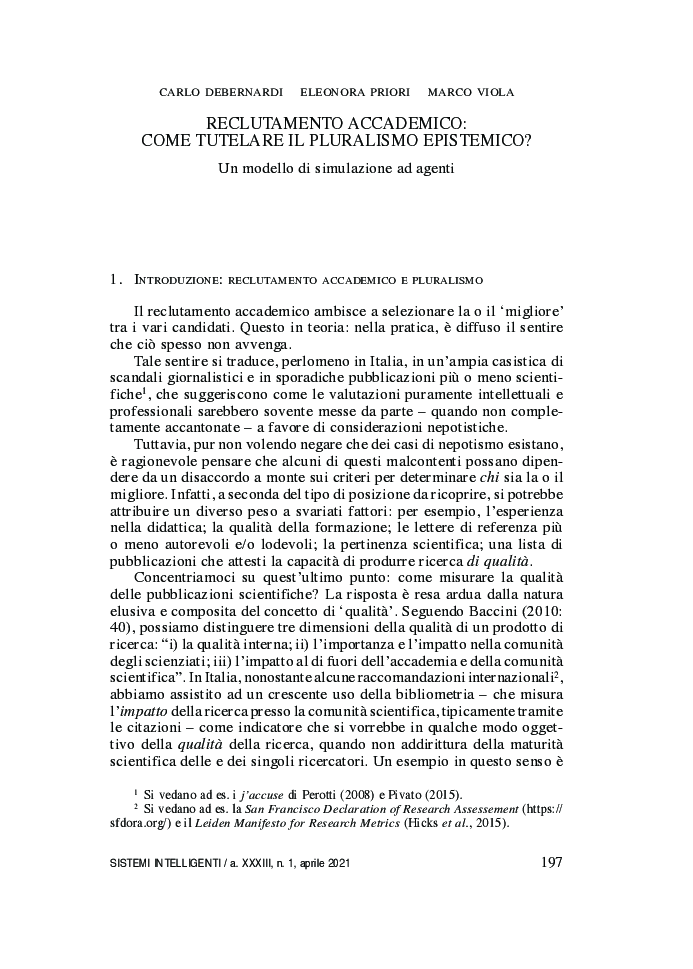