In our life we are daily asked to make decisions under risk or uncertainty, but these choices assume a different meaning for the 770 million people that live in extreme poverty. The parents of a poor household know that every risky choice they made can have a huge impact on the well-being and the survival of their kids. The severity of consequences modifies the decisional context and, more radically, might have an impact on the decisional style. The burden of poverty indeed causes negative stress and cognitive load and, in turn, leads to short-sighted and risk-averse decision-making. Recently, experimental evidence of peculiar decision-making style under risk has been found for both poor adults and children. Children exposed to chronic poverty were found to be less sensitive to low frequency-high magnitude losses and exhibited greater maladaptive risk-taking than children not exposed to poverty. Another experimental study, where a sample of poor individuals has been compared with a sample of rich individuals in a risk task, underlines differences in behaviors. As we might expect, choosing how much risk to take, the rich were sensitive to variations in the magnitude of both losses and gains. The poor, however, were sensitive only to changes in the magnitude of gains, while they were completely insensitive to changes in the magnitude of losses. In other contexts, poverty appears to impact individual preferences for risk. Individuals who were more likely to face income uncertainty or to become liquidity-constrained were less willing to pay for a risk security, thus exhibiting a higher degree of absolute risk aversion. In a longitudinal study, lower-income individuals were also found to be less willing to take risks, as measured by a self reported risk question. However, many questions on how poverty affects risk choices remain unanswered. By increasing our effort in studying the poor's decision-making style, we will improve both theoretical comprehension of the phenomenon and effectiveness of poverty eradication policies. 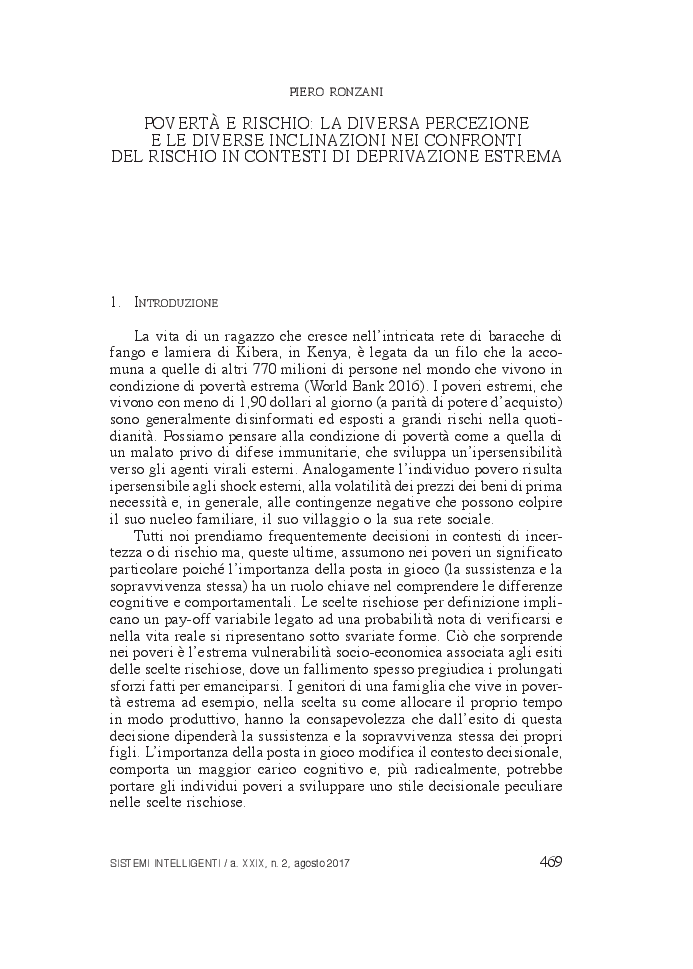