The night of October 9th 2014, a major flood due to heavy rainfalls devastated Genoa. That event followed a previous flood, occurred just two years before, which had very similar dynamics in terms of damages to belongings and loss of lives. Genoa is particularly exposed to the risk of floods, due to the complex interaction of factors like the urban development, the orographic nature of the area, the meteorological events and citizens' behaviours. Community resilience is therefore based on the shared commitment of stakeholders to cope with the abovementioned factors. Citizens' risk perception and safe behaviours will be based on trust towards political and technical institutions that regulate the territory, monitor the weather, issue the alerts and manage the emergency response. If citizens lack trust, the connection between stakeholders will be weak and the system, eventually, will be brittle. In this paper we describe the reaction of media after the flood, analysing titles of news reports on newspapers and television. We observed four clusters of themes: the debate about the funds for the recovery, an emotionally charged description of the flood outcomes, a description of hydraulic works that should have been done in advance, and, eventually, accusations against the political or technical institutions that allegedly mismanaged the situation. We claim that the clusters represent an emotionally driven mood of public opinion after the event, which will set the ground for cognitive biases like hindsight bias and outcome bias. These biases trigger a simplistic approach in explaining the events, and, most of all, they stimulate a blame culture, where the need for a scapegoat is the primary goal. This will lead to a lack of trust towards political and technical institutions and, eventually, to the development of uncontrolled and not coherent attitudes towards risk in a town, like Genoa, that may easily undergo a similar event in the future. 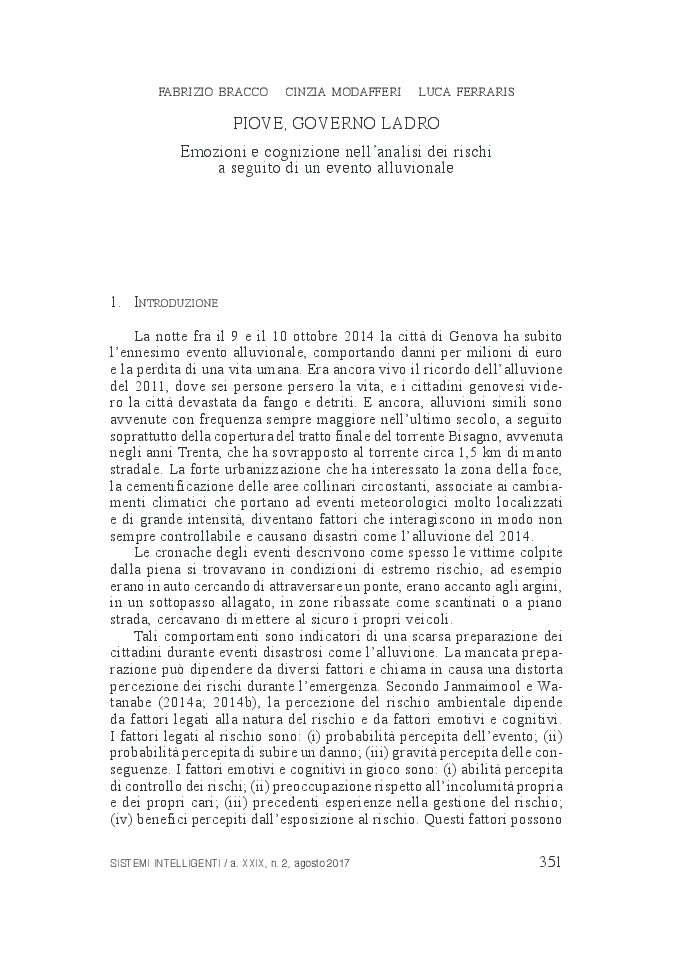