One aspect of decision-making concerns the choice between a risky option, linked to uncertain results, and a safe option. According to Lopes (1983), an individual exposes herself to a «risk» when she makes a decision being aware of the probability of loss associated with it; in contrast, Vlek and Stallen (1981) define «risk» on the basis of how negatively an individual evaluates the effect of a loss originated by her decision. Some authors (Fischhoff et al. 1981) assert that risk propensity is a stable trait during development and under all circumstances; according to others, risk proneness is an inclination influenced by personal judgement as to whether a determined decision is able to determine a benefit or not (Sitkin and Pablo 1992). More recently, risk proneness has been investigated even in children, in order to identify the onset and the tendency to potentially develop hazardous behaviors. It was found that risk proneness depends on age: for example, in situations in which there is a small probability of a great loss, children in primary school are more inclined to choose the risky option rather than the safe one, while adults behave in the opposite way (Harbaugh et al. 2002). In order to investigate the evolutionary roots of risk proneness, this aspect of decision-making has been also examined in non-human primates, where the scenario seems to be rather complicated. Chimpanzees, rhesus macaques and capuchin monkeys prefer risky options (De Petrillo et al. 2015, Hayden e Platt 2007; Heilbronner et al. 2008; McCoy e Platt 2005), bonobos, cotton-top tamarins and lemurs are risk averse (Heilbronner et al. 2008, MacLean, Mandalaywala e Brannon 2012, Stevens 2010), whereas common marmosets are indifferent between options (Stevens 2010). The most accredited hypothesis sustains that these differences are due to the environment in which these species evolved and their feeding ecology (Gigerenzer e Todd 1999, Heilbronner et al. 2008). Nevertheless, the evolutionary trajectory of the ability to face with risky decisions is still not entirely understood. Furthermore, given the multiplicity of theoretical and methodological approaches that have investigated these questions, neither the mechanisms underlying decision-making under risk are yet well defined, nor which are the cognitive, social and emotional factors that influence this construct. Recently, the focus has shifted from the cognitive to the emotional aspects of decisional processes in risky situations. As Schwarz (2000) affirms, the relationship between decision making and emotions is preeminent and bidirectional: the positive or negative result of a decision can deeply influence the feelings of the decision maker and consequently her choice ability; besides, an emotional dysregulation (i.e., a particularly high level of impulsiveness and anger) could be at the basis of the assumption of hazardous choices. In this paper, we will review, in a comparative perspective, the studies that have investigated the emotional aspects of decision-making under risk in children and in non-human primates, highlighting the possible elements of continuity and difference in the emotional mechanisms at the basis of decisions in contexts of risk. 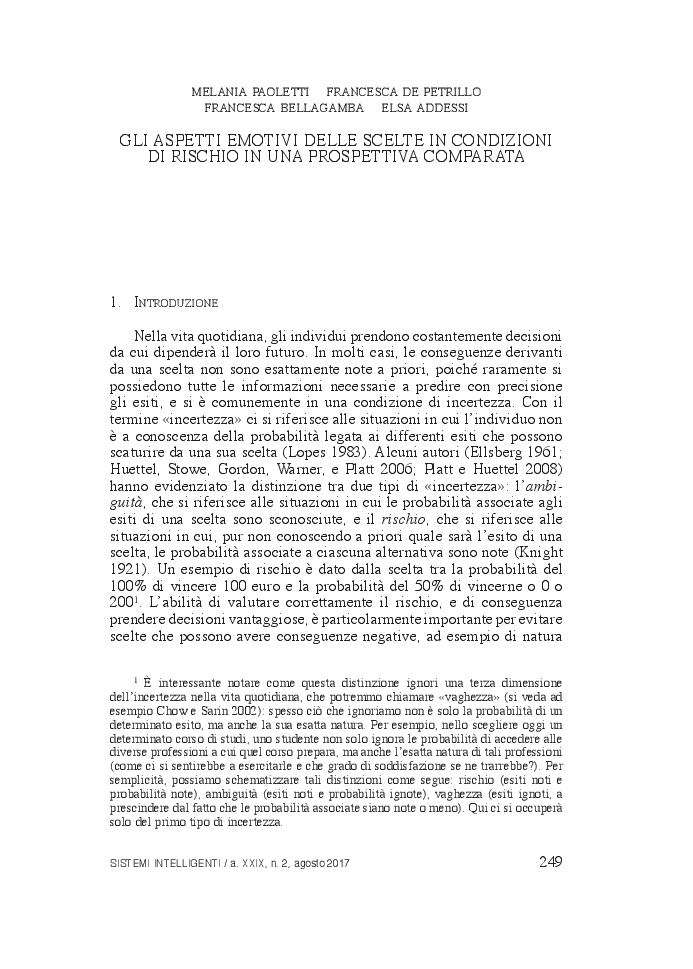