An intervention is classified as a nudge when it is not a coercive measure, retains freedom of choice, is based on automatic and reflex responses, does not involve methods of direct persuasion, does not significantly alter economic incentives, and does revise the context of choice according to the discoveries of behavioural economics. What is proposed is therefore a form of "libertarian paternalism" that has a dual valency. As paternalism, it aims to make up for citizens' irrational and self-harming tendencies by «gently nudging them» to decide rationally for their own good. In its libertarian form it aims to give the last word to the outcome of the conscious and deliberative processes of the individual citizen who can always choose to resist the nudge. Thaler and Sunstein's thesis is that citizens are subject to many deviations of rationality that bring them to make a decision that is against their own interests. This widespread irrationality is provoked by the automatic judgement and decision-making behaviour enabled by heuristics. Thaler and Sunstein's theses derive in part from the programme of behavioural economics commenced in the postwar period by Herbert Simon and continued in the 70s by Daniel Kahneman, Amos Tversky and their school. However, this approach is based on a distorted concept of bounded rationality focused on the study of the correspondence between judgement and decision-making performance in tests and laboratory simulations and canonical models of probabilistic and deductive rationality. As it is clear from the Simonian framework and from subsequent developments there are four attributes of the concept of bounded rationality that contrast with the current approach of behavioural economics that inspired Nudge theory. This is not a rationality that is interested in questions of form, but rather in the question of ecological adaptation to the environment of choice and problem-solving. It centres on the procedural and realistic attributes of rationality and not on instrumental and conventionalist ones. It recognises that the complexity of the real environment of choice brings the player face to face with decisions in conditions of uncertainty rather than risk. Last but not least, it appears sceptical regarding the ability to divide the mind into separate systems of the intuitive-unconscious type and the analytical-conscious type as it is supported by Thaler and Sunstein. 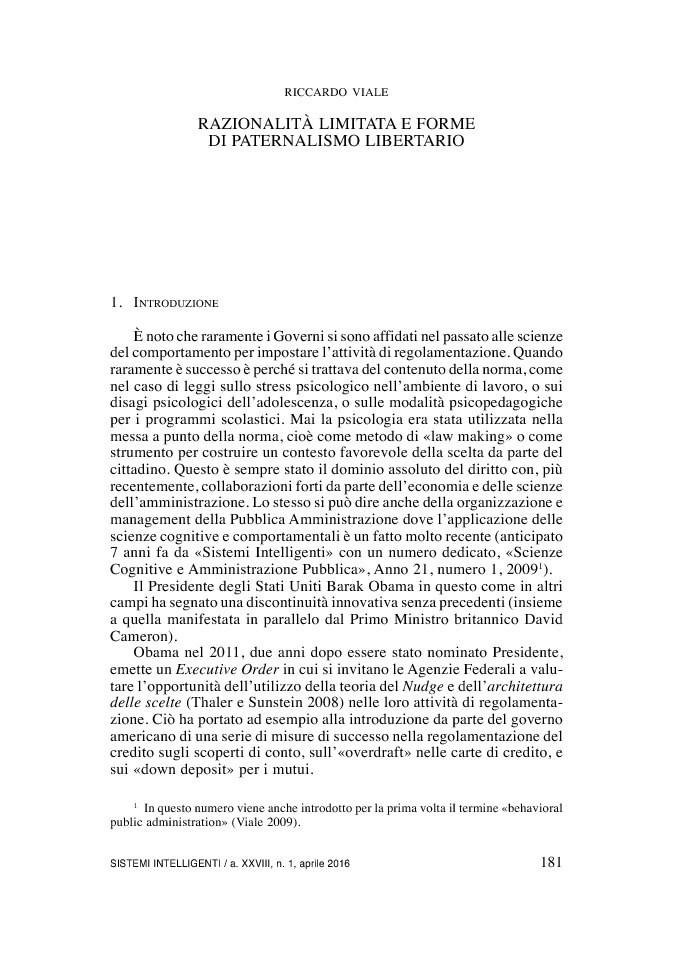