Background: Theory of Mind (ToM), defined as the ability to attribute mental states to one's self and others, plays a key role in driving behaviour and social interactions. It has been recently proposed that the social and behavioural problems reported in neurodegenerative disorders such as frontotemporal dementia and motor neurone disease (MND) may at least partially be the result of an impairment in the ToM domain. In the present study, we investigated whether MND patients' performance on a ToM task encompassing both "non-social" and "social" stereotyped situations showed a differential degree of impairment, with the "social" part presenting a higher degree of difficulty than the "nonsocial" part. Methods: Two groups of MND patients (n = 9, age range 33-83 years), and healthy controls (n = 10, age range 47-71 years) were administered the Reading the Mind in the Eyes task, and a computerized version of a comic strip task depicting both "non-social" and "social" situations that required participants to choose verbally the most appropriate continuation of a series of comic strips. Results: MND patients' performance on the RME was equivalent to healthy controls' one. MND patients' performance on the comic strip task was significantly poor on the "social" part but not on the "non-social" part, compared with healthy controls (p < 0.01). Discussion: MND patients performed well on the RME and on the "non-social" part of the comic strip task, but interestingly their performance on the "social" part was significantly poor, compared with healthy controls. These results support the experimental hypothesis and suggest the presence of specific ToM problems associated with the MND condition. The importance of a detailed ToM assessment in order to investigate the possible link between behavioural/social problems and ToM impairment is underlined. 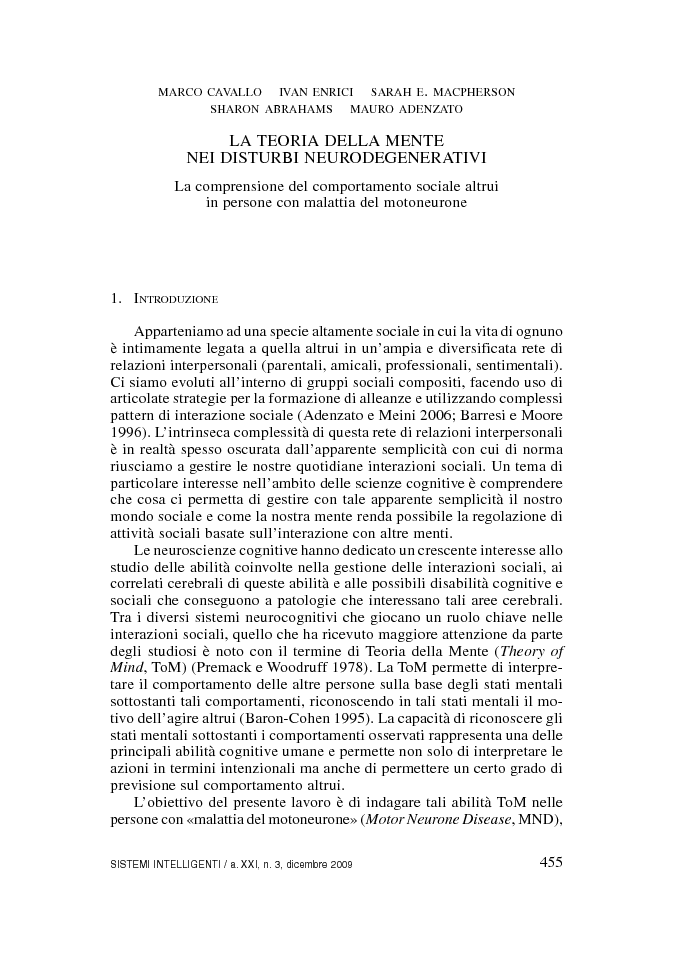