The present contribution stems from the belief that the discussion about the organization of scientific knowledge in terms of scientific-disciplinary sectors should be taken in scientific terms, i.e., on the basis of reliable empirical data. In this vein, all the professors and researchers of dynamic psychology in the Italian universities have been asked to indicate five research products that they published in the last four years and that they considered as the most representative of their current scientific production. Eighty-four percent of these subjects (N = 94) accepted to participate in the study, which yields to 459 scientific contributions analyzed in the current study. These contributions were examined at both descriptive (number of authors, typology of contribution, scientific indexing, foreign coauthors) and content levels. After the reliability of the indicators concerning the topics of the contributions was tested via inter-rater agreement statistics, these indicators were used within a multiple correspondence analysis (MCA) to derive their object scores; such scores were then used in a cluster analysis to identify the principal research domains in dynamic psychology. Three clusters emerged (clinical dynamics, group dynamics, and attachment dynamics) that displayed sufficient levels of both internal cohesion and separation from each other. The clusters were also easy to identify in their projection on the two MCA axes, which were subsequently interpreted as theory axis and observation field axis, respectively. However, it was also observed that only 28% of the participants had selected publications belonging to a single cluster, which indicates that dynamic psychology represents a framework of theoretical and empirical research where clinical, social, and affect development domains are intertwined between them. Therefore, the distinctive characteristic of the dynamic psychology sector is exactly the capacity to put into dialogue and to integrate knowledge from other disciplinary branches and from other research perspectives. Dynamic psychology therefore constitutes a very specific and distinct area of theory, research and teaching in the academia. 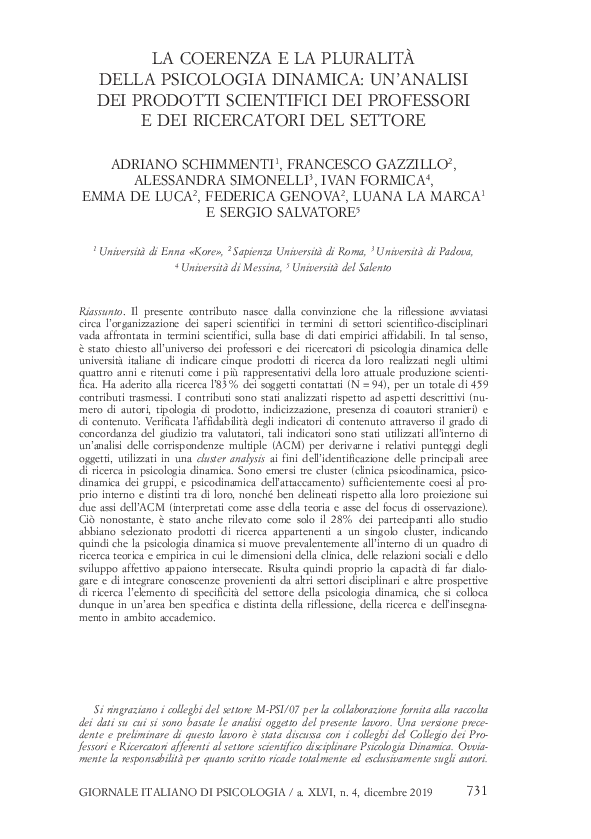