Despite the fact that near 2% of the Italian population suffers from Gambling Disorder (GD), the nature of psychopathological variables accounting for the disorder remains partially unclear. In particular, studies examining the link between pathological personality and GD suffer from important limitations principally due to the use of instrument evaluating adaptive personality traits or being based on a categorical conceptualization of pathological personality. The aim of the present study was to bridge such gaps, investigating the role played by pathological personality traits in a clinical population of addicted gamblers. A group of addicted gamblers (N = 70) and a group of healthy controls (N = 105) fulfilled the South Oaks Gambling Screen (SOGS, Lesieur & Blume, 1987) and the Personality Inventory for DSM-V (PID-5; Krueger et al., 2011). Analyses of variance showed that addicted gamblers scored higher than healthy controls on the five domains of the PID-5 and on some specific personality facets. Moreover, the multiple regression analysis indicated that only the Disinhibition domain remained a significant and positive predictor of GD severity whereas the Detachment factor predicted negatively and significantly SOGS' scores. Our data supported results of previous studies examining the link between GD and Personality Disorders. Moreover, a dimensional perspective of pathological personality seems promising for the understanding of specific components accounting for the comorbidity between GD and personality disorders. 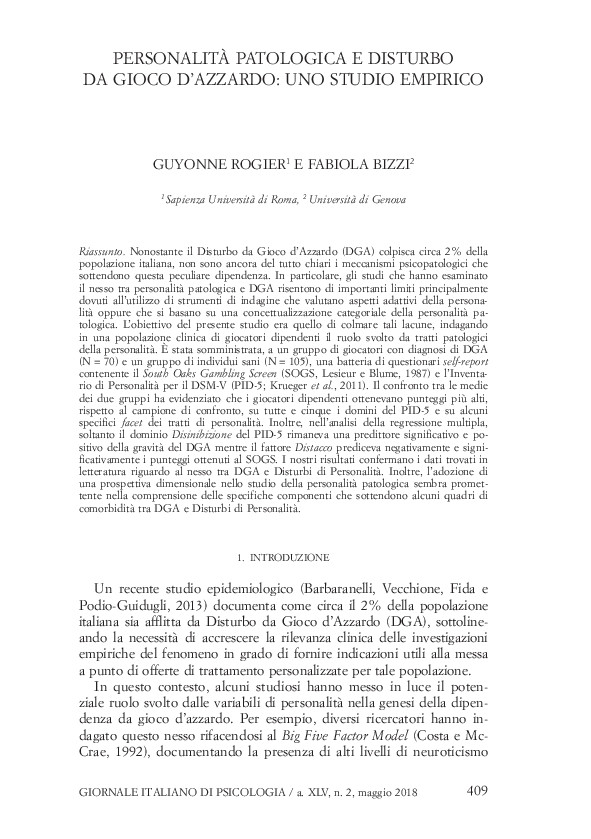