The study aims to explore the role of some socio-demographic characteristics and of two Self-monitoring styles ("getting ahead" and "getting along"; Wolfe, Lennox and Cutler, 1986) in the process of immigrants' acculturation. The subjects of the research were 156 Polish immigrants in Rome. Participants compiled the Scale of Self-monitoring (Lennox and Wolfe, 1984) and the Scale of acculturation strategies (Kosic, 1998). The Factorial Analysis confirmed structure of two ortogonal factors for both scales: for the Self-monitoring scale the dimensions are "getting ahead" and "getting along", whereas for the Scale of acculturation strategies the dimensions are "percepted acceptance by the host group" and "nostalgia of the culture of origin". For the two dimensions of the Scale of acculturation strategies, the sum of the score of the items fulfilling the relative dimensions has been calculated and subsequantly the median split technique allowed the clasification of the subjects in four categories: assimilated, integrated, separated and marginalisated. For the verification of the association among these two dimensions, styles of the Self-monitoring and socio-demographic characteristics we conducted the Analysis of Canonical Correlation which revealed two Canonica Dimensions. The first canonical dimension showed that the "percepted acceptance" has a positive association with the style of "getting ahead" and a negative association with the style of "getting along", whereas the second Canonical dimension revealed that "nostalgia" has a positive relation with both styles of the Self-monitoring. Moreover, regard the socio-demographic characteristics, the percepted acceptance is associated with higher level of education and knowledge of the host language, whereas the nostalgia is present for the married and older subjects. 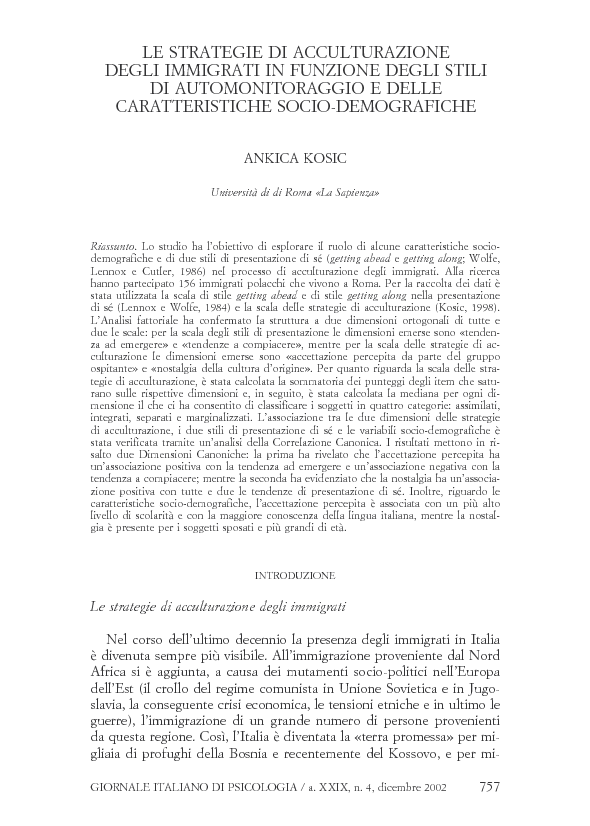