The present work aims to be a critical review about the current state of the art on the «Eye Movement Desensitization and Reprocessing» (EMDR). Starting from a description of the procedure of the technique, it follows an historical review about the evidence of efficacy of EMDR (Bisson, Ehlers, Matthews, Pilling, Richards and Turner, 2007; Bradley, Greene, Russ, Dutra and Westen, 2005; Davidson and Parker, 2001), and assumptions regarding its functioning, with particular reference to the role of eye movements (Schubert, Lee and Drummond, 2011). The final chapter is a critical analysis of some much debated issues including the spread of EMDR in clinical practice (Herbert, Lilienfeld, Lohr, Montgomery, O'Donohue, Rosen and Tolin, 2000), the originality of the technique (Lohr, Lilienfeld, Tolin and Herbert, 1999; Cahill, Carrigan and Frueh, 1999) and the theory developed by Francine Shapiro (1995), the Adaptive Information Processing model. Currently, EMDR is considered first-line treatment for Post- Traumatic Stress Disorder (PTSD) (Ehlers, Bisson, Clark, Creamer, Pilling, Richards, Schnurr, Turner and Yule and, 2010; Cloitre, 2009), and a mechanism through which lead to therapeutic resolution seems to be distancing from the traumatic image (Gunter and Bonder, 2008; Lee and Drummond, 2008). It needs further studies in the future to confirm or reject the distancing hypothesis. 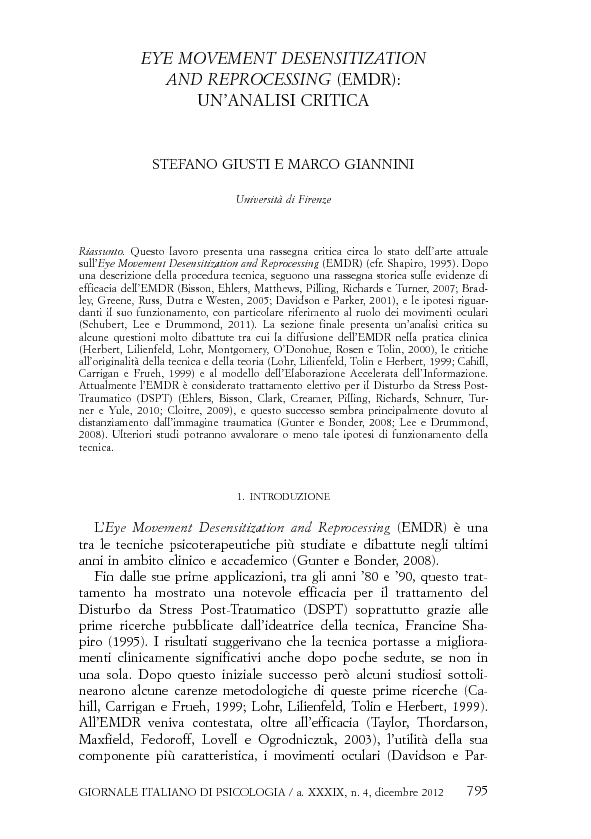