In addition to having surpassed "social cognition" and opened up new research perspectives, the theory of social representations - like classic/leading psychology theories - deals with the divides which separate different sciences and realities; albeit more than twenty years old, however, it still has several inherent contradictions and epistemological weaknesses which may result in a comeback of both less problematic and narrower traditional scientific paradigms. This spurred the need to radically revise it, whereby it was found that dualism between consensual and reified universes is the theory's very qualifying and most important element. Indeed, on the one hand, dualism is the source of the theory's contradictions and weaknesses which have led to a restricted interpretation of both science and common sense - the latter being once more regarded as a "lesser" kind of thought - as well as of its serious shortcomings when studying processes of change. On the other hand, dualism is the ultimately qualifying meaning of the whole theory and, because of its powerful potential when it comes to drawing comparisons with other theories and disciplines, it should be festered. This qualifying meaning paves the way for a new understanding of common sense as the ultimate kind of human thought, so rich in contrasts and in potential for change and innovation. Asserted by a minority of scholars, this revolutionary interpretation of common sense, which is reminiscent of the French Enlightenment and Gramsci's thought, shows us how to reconcile "opus alienum" - i.e., whatever is foreign and adverse to us - with "opus nostrum". 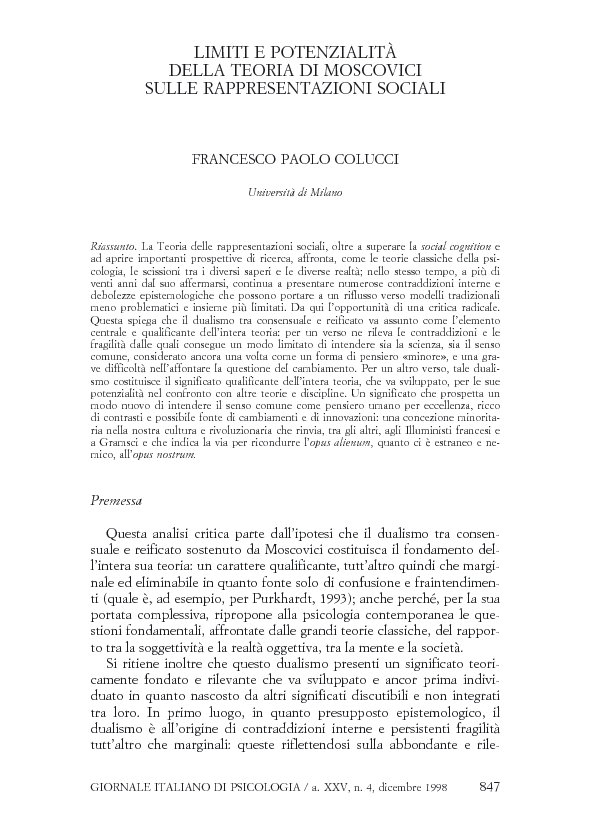