The aim of this research is to analyze the main vocal cues and strategies of which a liar makes use. 31 male university sudents were asked to insinuate doubts about an ambiguous picture in an expert. The subjects were required to describe the picture under three experimental conditions: telling the truth (T), lying to an acquiescent speaker (L1) and lying to a suspicious speaker (L2). The utterances were then subjected to a digitized acoustic analysis in order to measure nonverbal vocal variables (pitch: Fo mean, Fo range, Fo variability, Fo contour; intensity: mean, range, variability and contour of energy; rhythm: rate of articulation and rate of speech; tempo: length of sound and silent period). This was done by the Speech Lab Computer 4300. Some microstructural indexes as verbal variables were also analyzed (number of words, eloquency and fluency). Results showed that deception provokes an increment in Fo, values, a greater number of pauses and words as well as higher eloquency and fluency indexes. The tone of voice related to the two types of lie - prepared and unprepared - identifies three classes of liars: able liars, tense liars (more numerous in L1) and over-controled liars (more numerous in L2). It is argued that these differences are correlated to the complex task of lying and the need to control one's emotions during deception. The liar's effort to control his/her voice, however, can lead to his/her tone being over-controled or totally lacking in control (leakage). Finally, the research forwards an explanation on the strategies used by the good liar and in particular treats the self-deception hypothesis. 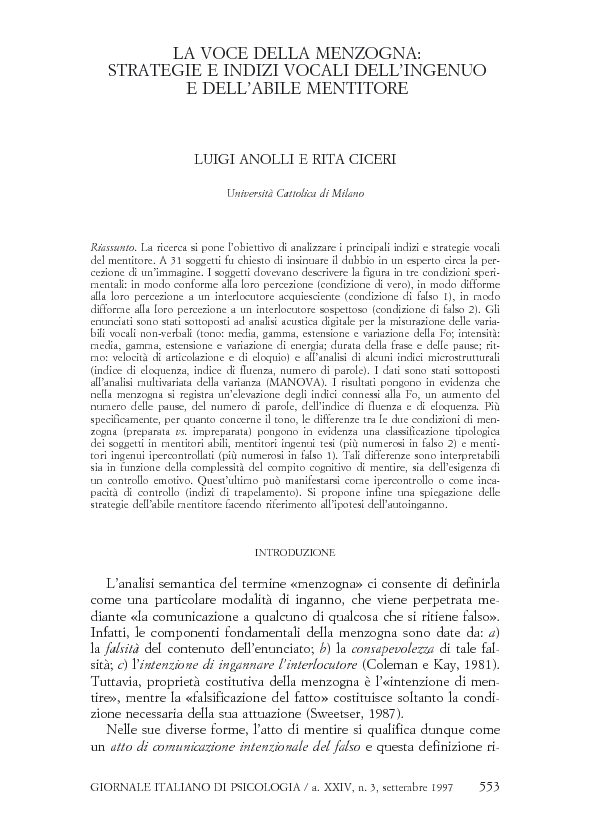