The results of some research carried out into the social representations of AIDS as expressed by adolescents in a school context are presented, by adopting a pragmatic approach to social representations. The main object of the research was to bring forth those representational aspects which are specifically linked whith juvenile identity and with the adolescent phase of life, so as to single out certain issues useful for preventive strategies. A sample of 680 subjects, representative of the Neapoletan school population (N = 48.645), was subjected to various investigation methods and techniques: the data relating to a questionnaire on the metaphors of the HIV virus and to free associations with the word-stimuli "AIDS", "AIDS-patients", "young people", "prevention", and "yourself", are reported. The representation of the disease appears complex because of the co-presence of various types of knowledge. It seems difficult to refer AIDS to the pre-existing interpretative frames and metaphorical images taken from scientific knowledge or common knowledge: in fact, the image of the HIV virus proves to be extremely blurred, defying any kind of definition, except in negative terms. The most salient anchorage of this representation is formed by a pre-scientific conception, which overlaps a more scientific conception and which is based on a hidden, pervasive, humoral, and hard-to-control type of transmission. This finding helps us to understand why young people, both as individuals and as a group, tend to move away from the disease and its prevention, by working out their own specific defence-strategies, which pivot on the pursuit of values, such as personal happiness and social success. 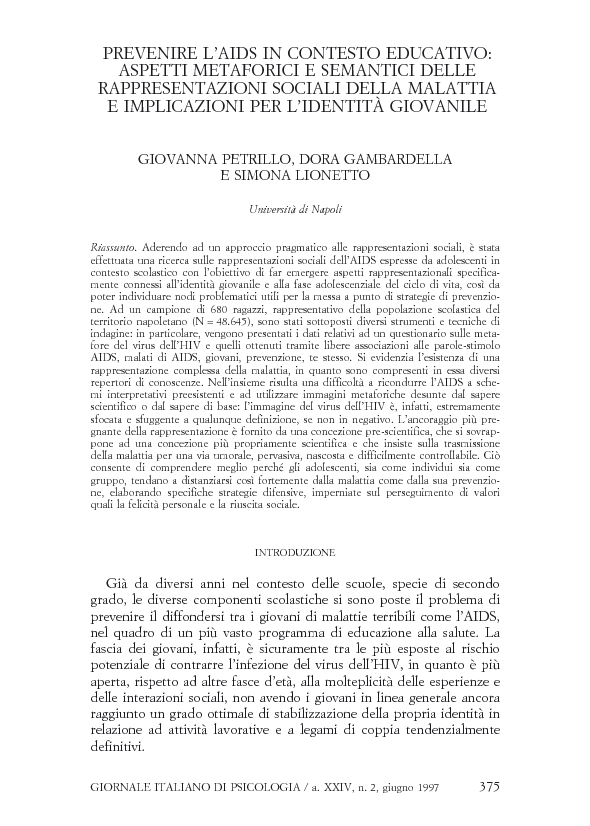