This contribution analyzes, with the support of hitherto largely unexplored documentary and archival sources, the institutional and scientific vicissitudes occurred to the Institute of Psychology at the University of Padua in the period between Cesare Musatti’s relocation to Milan and the post-war academic reconsolidation managed by Fabio Metelli. After the removal of Musatti – who in 1928 replaced Vittorio Benussi after his sudden death in a period of general marginalization and «crisis» of the discipline in Italy –, in 1939 the teaching of Psychology and the direction of the Laboratory was transferred, with the endorsement of the Faculty of Humanities and Philosophy, to the Faculty of Medicine. However, in 1942 the philosophers, because of the potential separation inherent to the discipline between its experimental component, which at that time was circumscribed to the psychotechnical field, and its theoretical dimension, which belonged to their field of competence, claimed the teaching for themselves. At the same time, they proposed to hand over the laboratory instruments to the Institute of Occupational Medicine, directed by Salvatore Maugeri. Nevertheless, returned to Padua after two years spent in the psychological branch of the National Research Council and having reached in 1942 the teaching qualification (libera docenza, Privatdozentur), in 1943 Metelli was assigned the teaching of Psychology. Thanks also to the support of Maugeri, he was able to preserve the autonomy of the discipline, to avoid the dispersion of the Institute’s assets and, starting from 1946, to resume the direction and the research activities in both the psychotechnical and perceptual fields. In the present paper, this delicate and complex phase of transition is reconstructed taking into account the teaching of Psychology, the directors of the Laboratory and their academic 700 affiliations, along with the research there carried out, and contextualizing the local events in the broader national framework. The troubles of the Paduan institute during the ’40s documented the hard inner shift of Psychology from a practical approach functional to contingent needs to his theoretical and generalist orientation focused on perception, in line with the peculiar tradition tracing back to Benussi. In the post-war period this will bear relevant results internationally recognized, and will ensure the academic and cultural affirmation of the discipline 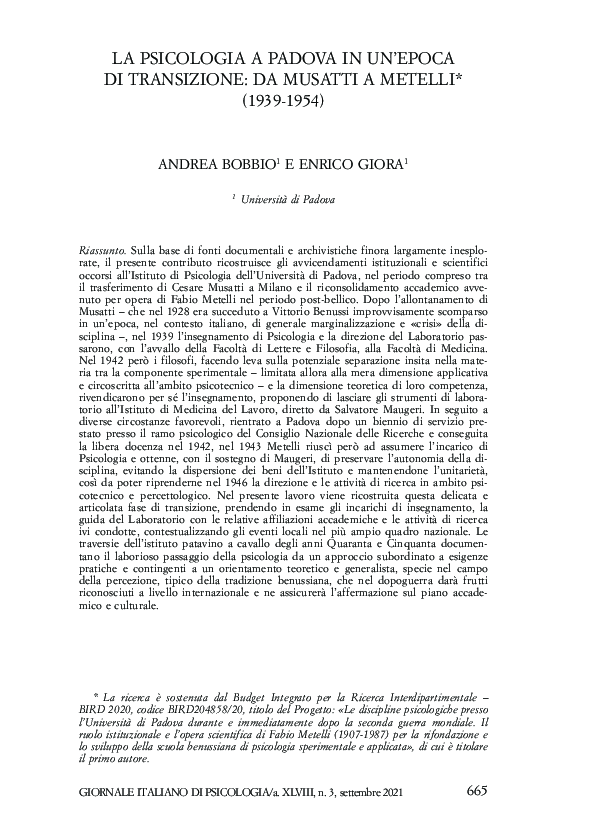