In the scientific-philosophical debate of the late nineteenth century, hearing was no longer discussed as a passive sense but became one of the active logical functions of the spirit (think, for example, of Hugo Riemann's 1874 "Musikalische Logic"). The concept of logic would then be fundamental in the theoretical writings of Arnold Schoenberg, with Theodor Wiesengrund Adorno later advancing the notion of "structural listening". This line of thought posited the idea of a "grammar ear" - that is, listening and hearing based on the type of logical-rational awareness that figures so largely in the structuralism paradigm. Post-modernism then saw the activity of hearing in a more hermeneutic sense. In the writings of Roland Barthes, in the more recent philosophy of Jean-Luc Nancy and also in such works as Luciano Berio's "Un re in ascolto" (1981-1983) and Luigi Nono's "Prometeo" (1984), what emerges is the notion (and requirement) of an "interpreting ear", which releases new possibilities of hearing and reading. Pedagogy takes advantage of both approaches, existing not in conflict but in synthesis. Such a pluralistic premiss envisages teaching methods as varying according to the listener's level of psychological and cognitive development. The presentation of Elliott Carter's solo violin piece "Riconoscenza per Goffredo Petrassi" (1984) to children of six years old requires the teacher (in the first year of primary school) to adopt an active method that stimulates curiosity about and exploration of the work. As Vygotskij so perceptively argued in his "Pedagogical Psychology" (1926), the teacher must posses solid knowledge but this must not be served up "ready made"; it should be presented in such a way that the pupil "learns from his/her own mistakes". Hence, a method of listening that proposes an initial introduction which is entirely free, with the teacher then serving as a guide to ever greater comprehension. Considering the level of psychological development of a six-years-old and the complex of musical invention to be found in "Riconoscenza", the teacher can fruitfully employ forms of spoken, drawn and gestural interpretation, with play on symbol and analogy. If pertinent - that is, linked by the teacher/guide with the actual processes of composition and creation - these reformulations in class will combine heuristic analysis, emotional partecipation and the exercise of socialisation. This proposal is to be seen in the context of pedagogy's growning interest in the teaching of the symbolic. 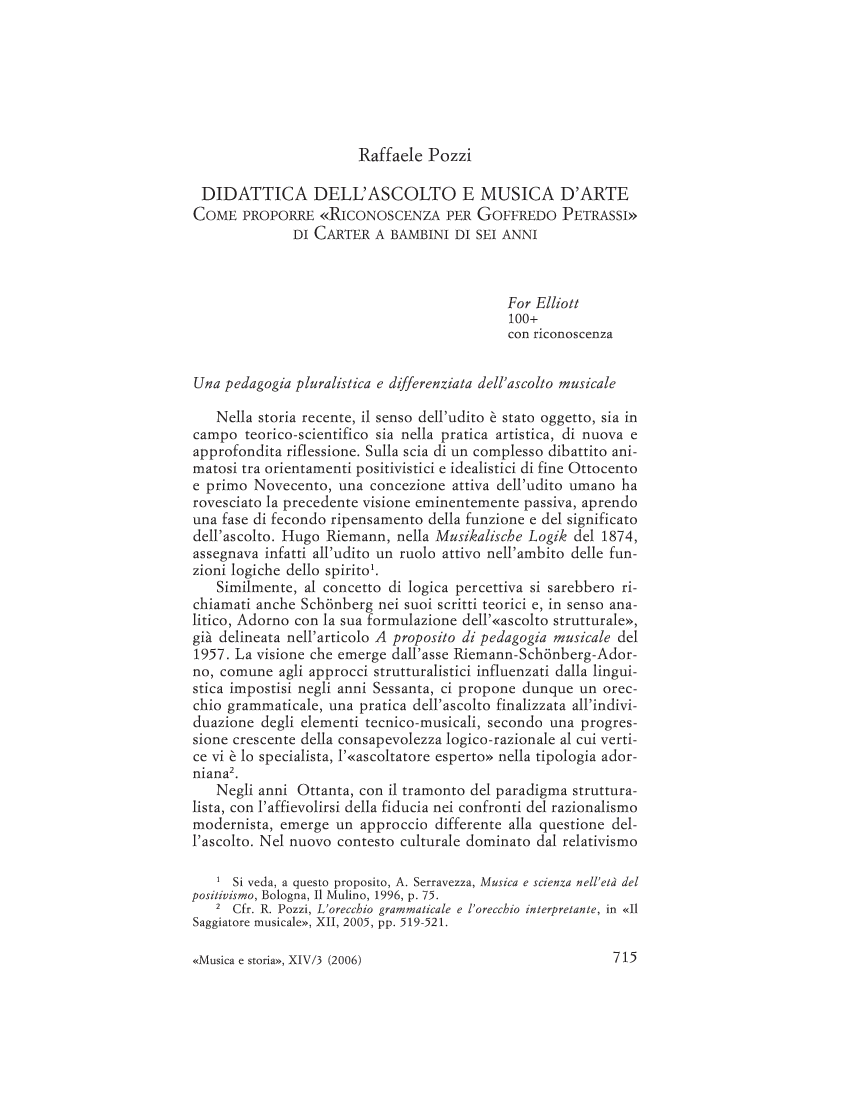