The grammar of pronominal a􁞹xation in Yimas displays complex patterns of interaction both among the set of pronominal pre􁞷xes, but also in connection with modal marking. Without modal marking, core arguments are expressed by discrete markers that compete for realisation in two pre􁞷xal slots, a competition that is governed by the person hierarchy and, among third person participants, by the thematic hierarchy. Modal markers target the same position as the outer pronominal pre􁞷x, triggering su􁞹xal realisation of the preempted pronominal argument. With intransitives (mostly), modals give rise to multiple exponence, requiring presence of the su􁞹x to redundantly mark the number of the S argument already realised by the inner pronominal pre􁞷x. I shall argue that these complex interactions can be analysed quite straightforwardly in a neo-templatic model of morphotactics, i.e. a model that recognises position classes as descriptive primitives. Moreover, the fact that su􁞹xal marking of core arguments is only licit in the context of modal marking requires a notion of in􁞸ectional constructions. I shall present Informationbased Morphology, a resource-sensitive model-theoretic approach to in􁞸ection and show how certain properties of the framework, in particular the possibility to capture discontinuous in􁞸ectional constructions by means of multiple inheritance, lend themselves naturally to an analysis of Yimas complex morphotactics. 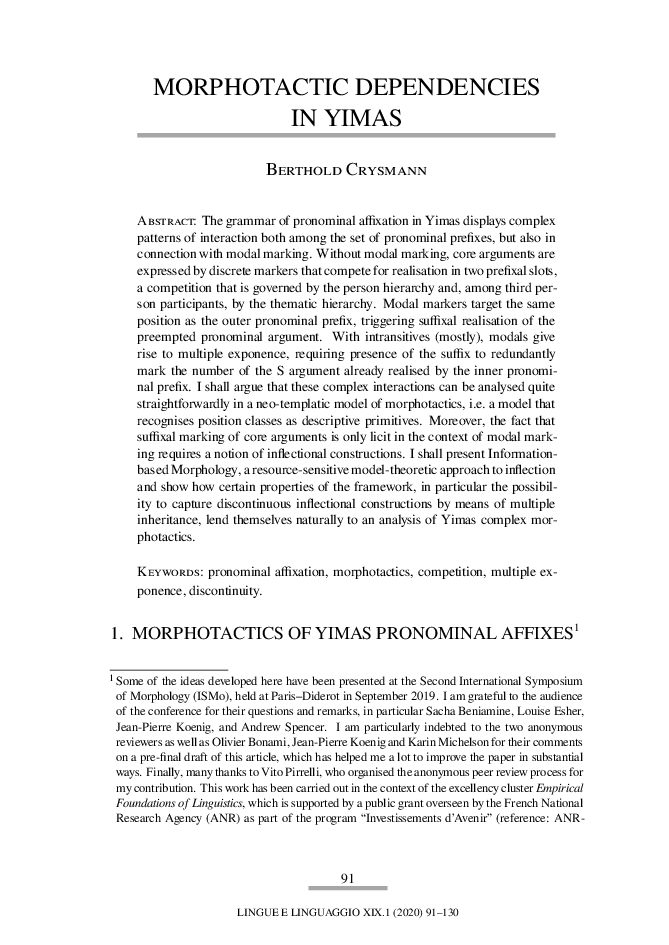