The analogical extension of verbal root allomorphs is a pervasive phenomenon in the history of the Romance languages. Some of the paradigms involved were levelled at later stages, which is especially the case for French, e.g. Old French trover (Modern French trouver) ‘􁞷nd’, amer (aimer) ‘love’ and plorer (pleurer) ‘cry’. Other verbs like venir ‘come’ and tenir ‘have/hold’ and their Old Florentine Italian counterparts venire and tenere still show signi􁞷- cant allomorphic patterns in Modern French and Modern Standard Italian (see also Spanish venir, tener). All paradigms mentioned here have in common that, at some point in their development, they display distributional patterns which can be associated with so-called morphomes. The aim of this paper is to propose a corpus-based analysis for the detection of the dynamics of analogical extensions in relation to the morphomic patterns ‘N’, ‘L’, ‘dark L’ and ‘U’. On the basis of these data, some of the factors discussed in the literature that might interact with morphomic structure will be tested. These factors are morpho-phonological markedness, type frequency and morpho-syntactic/ -semantic similarity. It will be shown that all three factors a􁞶ect a) the direction of analogical extensions by interacting with morphomic structure and b) their temporal-dynamic dimension. 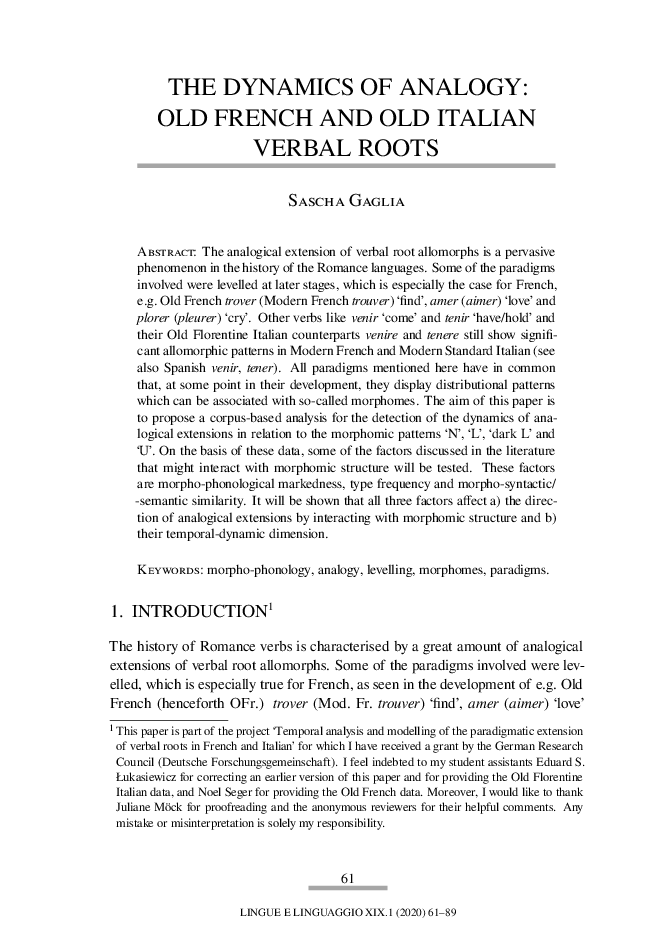