This paper analyses agreement relations that take place outside the Determiner Phrase (DP) in code-switching contexts. In particular, when a noun or a whole DP of a given language is inserted in a sentence spelledout in another language, the so-called "analogical gender" (i.e. the gender of the equivalent noun) raises interesting questions, since most of the theories on code-switching seem to be unable to account for all of the attested gender agreement patterns. Crucially, we will test the ability of nominal gender to be infinitely reusable as an "active goal" by the operation Agree. In particular, we will analyse gender relations that are realized outside the DP domain in German relative clauses and Italian ergative constructions, where the active goal for Agree is either a monolingual or a mixed DP. The results, obtained from a test administered to adult Italian-German bilingual speakers and highly proficient L2 learners, suggest that analogical gender cannot simply be analysed in terms of a (temporary) borrowing. Indeed, in mixed DPs displaying analogical gender, the gender of the selected N is not de-activated and may value a probe outside DP, a fact that is not expected under the borrowing analysis. Moreover, even a monolingual DP may receive the gender of the equivalent N, which shows up in long-distance agreement too. This suggests that the assignment of the analogical gender is syntactic in nature. 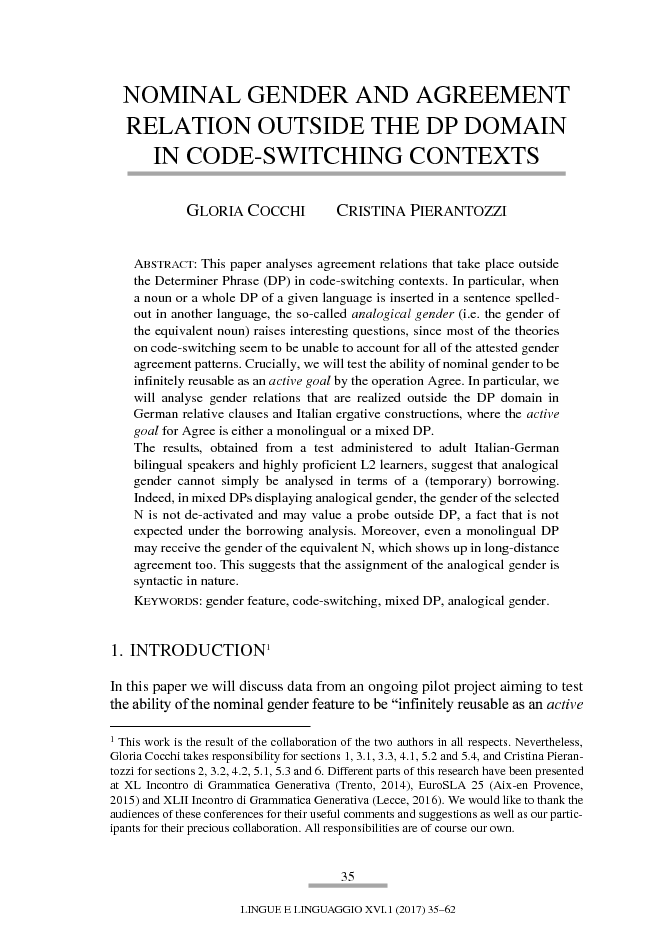