This paper argues in favour of the relation between the Spanish copular alternation ("ser"/"estar") and the Individual/Stage-Level distinction, which has generally been put into doubt by the latest studies in the field. I build the proposal on a new understanding of the IL/SL dichotomy as a basic aspectual distinction, and I argue that Individual Level Predicates (ILPs) and Stage Level Predicates (SLPs) are two aspectual classes that are essentially distinguished by the lack (ILPs) or the presence (SLPs) of inner aspect. Following a syntax-based account of inner aspect, I argue that SL-structures, unlike IL, are characterized by an Asp projection, which is triggered in narrow syntax by an uninterpretable aspectual feature in the lexical VP-domain. The presence of such a feature on "estar", and any other lexical SLP, is argued to account for the entire distribution of "ser" and "estar" copulas. The study shows how this novel approach to the IL/SL distinction thoroughly grasps the ser/estar alternation and provides considerable insights into the study of "Aktionsart". Moreover, the proposed analysis provides a formal explanation for the traditional descriptive IL/SL accounts of the "ser"/"estar" alternation. 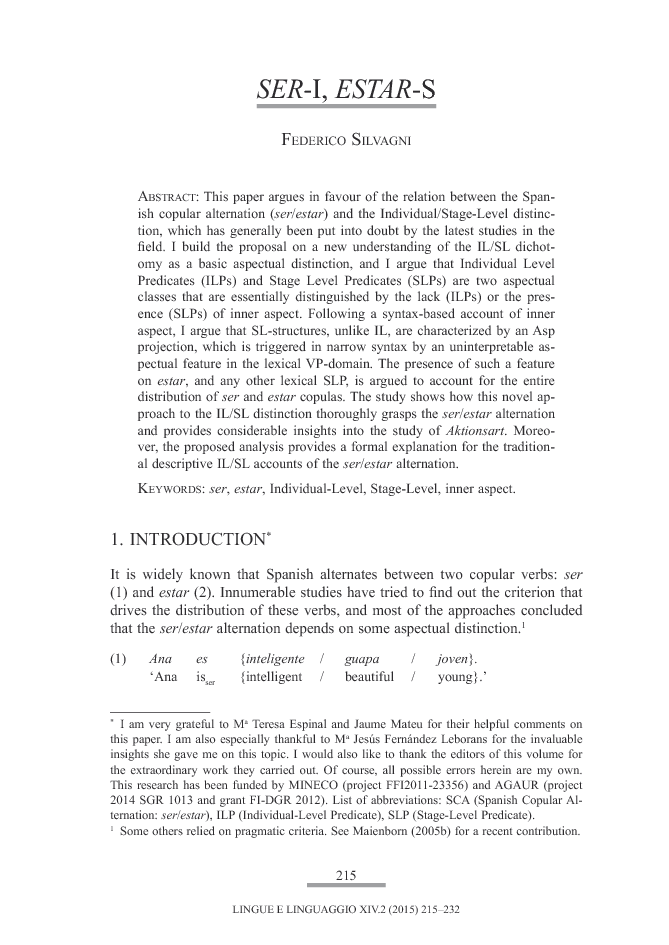