This paper explores mastery of grammatical gender in adult heritage speakers (HSs) of Italian by investigating how noun gender and noun morphology affect gender assignment and agreement. Fifty-four Italian HSs and forty Italian controls completed an Elicited Production Task (EPT) measuring assignment and agreement in the production of sentences and a Gender Assignment Task (GAT) measuring assignment at the word level. In both tasks, gender (masculine vs. feminine) and noun morphology (opaque vs. transparent) were manipulated in order to examine HSs’ potential overreliance on the default gender (masculine) and whether transparency would affect assignment and agreement. HSs performed almost at ceiling in both tasks, with higher performance in agreement (syntactic level) compared to assignment (lexical level). HSs performed better with masculine compared to feminine nouns, supporting masculine as a default gender strategy. In the EPT, we found a difference between assignment and agreement only for opaque nouns, suggesting greater difficulty in gender assignment with opaque nouns. Finally, both assignment and agreement were modulated by proficiency while Heritage Language (HL) use in the home was a significant predictor only for assignment, suggesting that consistent use of the HL in the home is beneficial for maintaining lexical gender knowledge 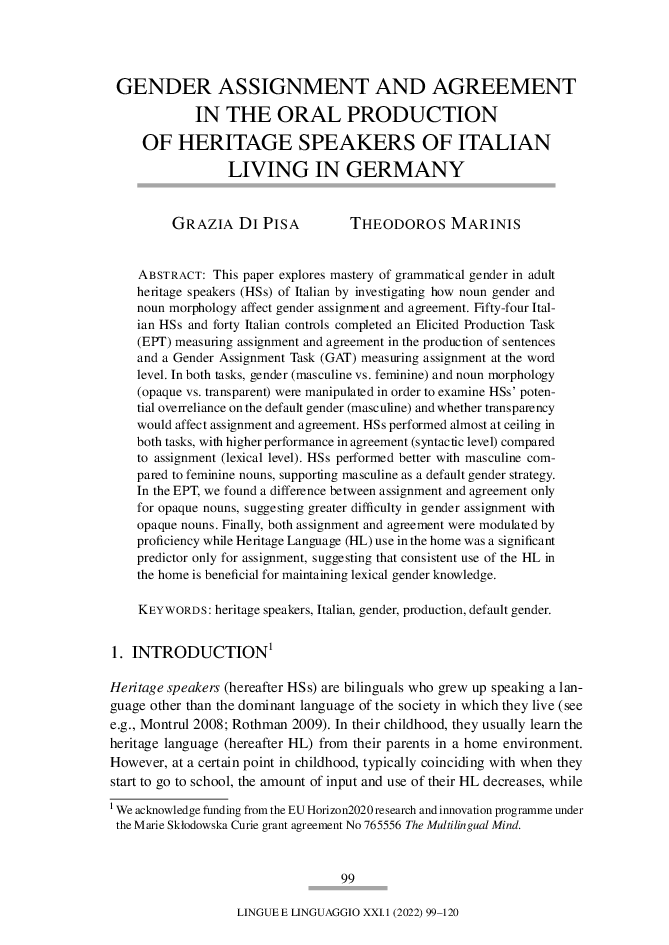