Happiness is - in German practical philosophy of the Eighteenth century - the fundamental notion both for individual ethics and for the understanding of the task of the State, consisting in the promotion of happiness through welfare and security (e. g. in Christian Wolff). This idea of «practical philosophy» is radically criticized by Kant, whose conception of the «practical» belongs on morality as grounded on the idea of freedom, independently from drives and desires of human nature, i. e. from happiness. The State has nothing to do with the happiness of the citizens: they have the right to search for happiness each in his own way and in his own space of freedom. Fichte and Hegel re-establish a positive role of impulses and desires in the dynamic constitution of the practical subject whose freedom has to be «real». The ethical life provides some kind of «satisfaction» of the needs of the individuals, but it can be just a limited one. According to Fichte, full satisfaction cannot be grasped as empirical happiness, but as religious, morally grounded experience of beatitude. Hegel's modern man has the right to his satisfaction, and to his search for it, but neither ethical life nor universal history is a field of happiness. The concept of happiness is at its sunset. 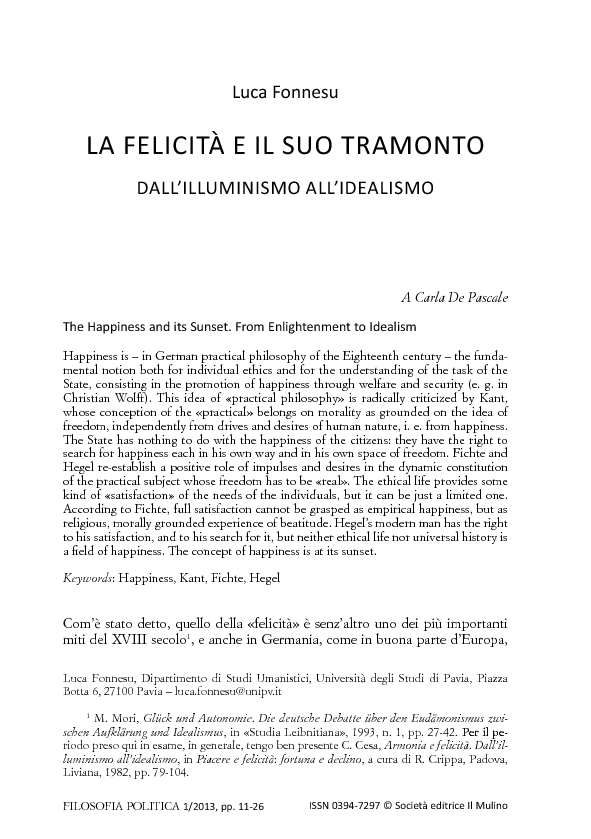