Political modernity trusted that it was possible to «program» happiness, which was regarded as the focus of politics. This project was developed in governmental, administrative and biopolitical ways. The assumption of this project was the «viability» and the odd right to the «pursuit of happiness» whose contradictions are analyzed in this issue of «Filosofia politica» (1/2013). The realization of this project entailed the naturalization of the human according to which the physiologic rule of the natural tendency to pleasure emerges, and wants and needs can be satisfied. By assuming that rule, it is possible to modify the pathological perversions that produced human unhappiness, and to rewrite the features of the State. Economy becomes the truth of political like, insofar as it offers strategies fit for pursuing wellbeing. The essays collected in this second issue about «happiness» (see «Filosofia politica», 3/2012) analyze some of the most important nodes of this political program which turned happiness into an economically governed wellbeing. Against the ethic of German idealism, the economic dimension of the positivist community, Bentham's conservative reformism, cooperative socialism, utilitarianism and wellbeing are the conceptual coordinates. The contemporary articulation of this project becomes much more complicate, once Sen and Nussbaum aim to promote the conditions according to which one can pursue the empowerment of her/his own life: a good life built on relations and relative to social context. 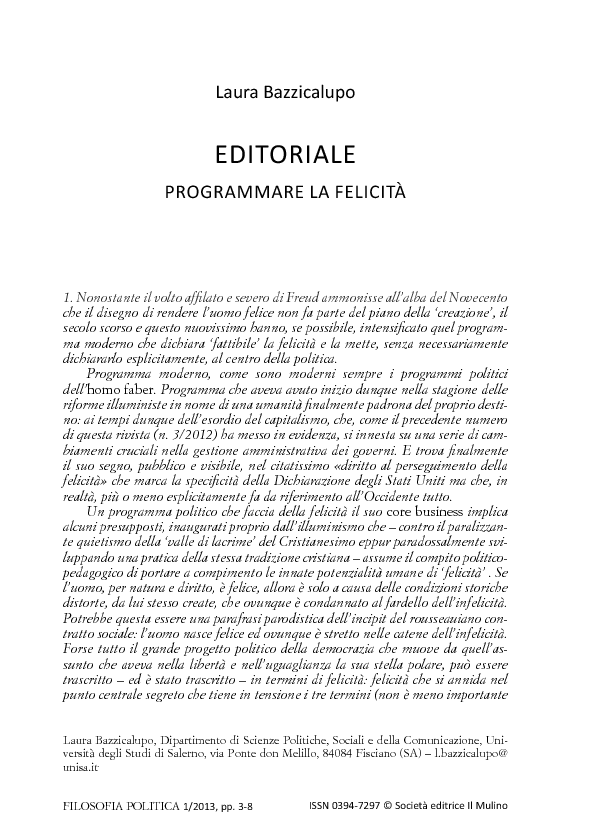