Sixty years after the publication of the last volumes of the monumental A Study of History, the political thought of Arnold Joseph Toynbee seems to re-gain renewed actuality in interpreting the radical transformations of the world-wide geopolitical scenery. From his Janus-headed perspective, through which he studies international affairs not only as relations between State and empire but also as encounters between civilizations, Toynbee investigates the long-term dynamics of the world politics. This essay analyses the inextricable role of geopolitical factors in Toynbee's theory. During the Twentieth century, in fact, Toynbee's historical and international analysis touched on time after time many of the topics of Geopolitics, such as the permanent opposition between continental and naval power. He sees geography as a conditioning rather than determining element in the conduct of foreign policy, and his works also implicitly reflect the emergence of Geopolitics in the field of International Relations. Moreover, this article suggest that since the end of the Cold War the core of Toynbee's theory, in particular the encounter and the clash between civilizations, can be regarded as a new vision in order to understand and perhaps foresee the future of the World order. 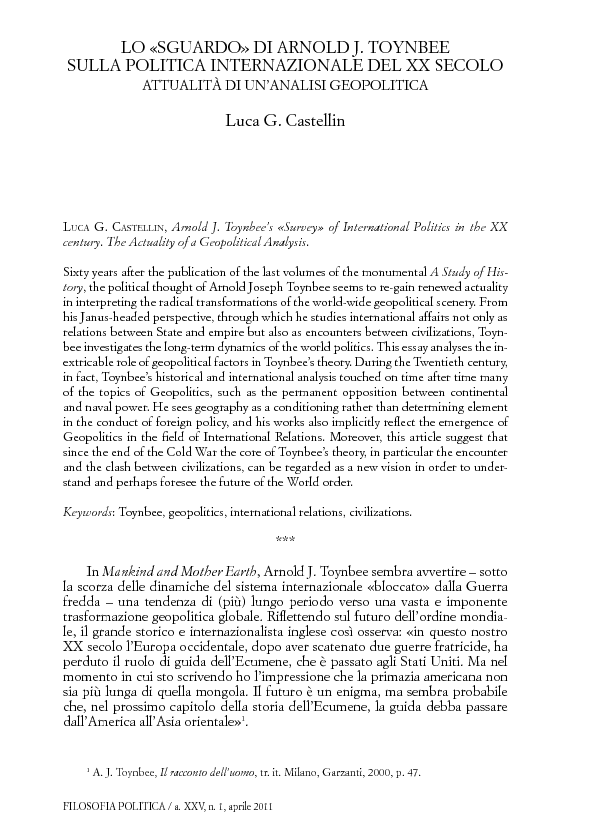