Does the identity recorded by documents certify what you are or affect your way of being? Do the different classes of subjects to which the rules grant rights or impose obligations exist before being utilized by law? Is the role conferred by the institutions a false mask that can be dismissed at the end of a working day or is it a stubborn demon that possesses the soul of the man and the citizen? These questions introduce the issue of this paper: the relationship between Law and identity, in particular the contribution of legal sphere to the construction or manipulation of collective identities such as gender, race, nationality or class. The author opts for a constructivist approach and describes the process of «legal canonization of identities», i.e. the four stages of generation of the social groups as legal categories (both those created ex novo by the legislator and those existing before a rule calls them into question). Therefore Law is defined as a «socialmatrix of identities». This consideration opens a number of possible consequences including: i) a collision between the normative and cognitive dimension of rules; ii) a rethinking of the problem of validity because the existence of a legal system, according to this thesis, would depend more on its capacity to shape the epistemic categories of citizens than by the citizens' obedience to its rules; iii) a reflection on the possibility of survival of a-legal identities: not legal neither illegal, identities simply not covered by the Law. 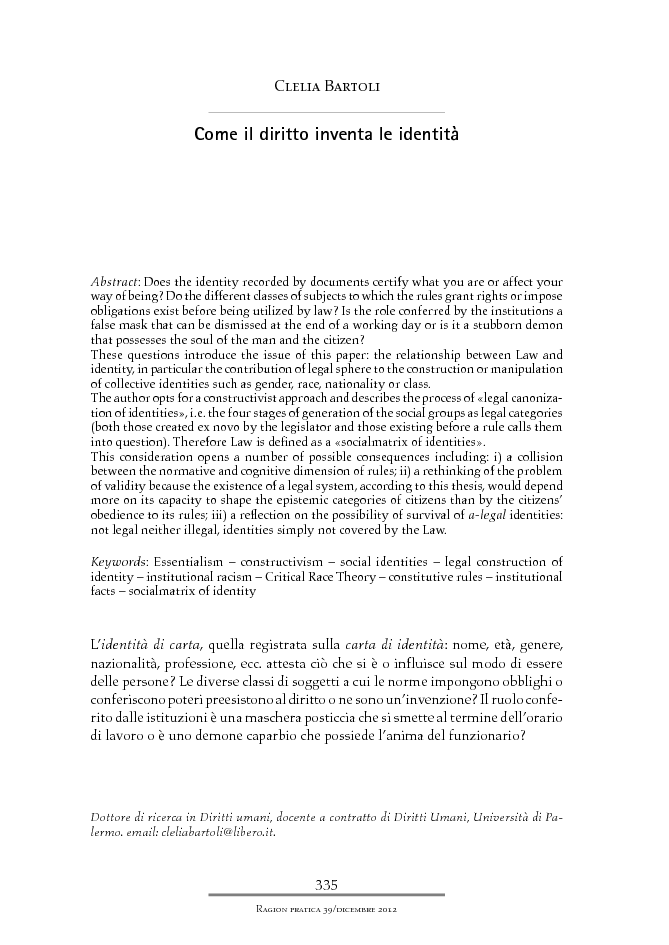