This paper presents a reading of some issues surrounding the contemporary debate between Simon Blackburn and Huw Price concerning expressivism and neo-pragmatism. Blackburn's version of expressivism is known as quasi-realism. On the other hand, Price has recently proposed a version of neo-pragmatism, which he calls global expressivism, because it can also be thought of as an attempt to extend the expressivist thesis across the board, beyond the traditional boundaries of expressivism. The respective positions are analyzed and discussed. Quasi-realism maintains that the primary function of certain of our statements is not that of describing how things are. Nevertheless, it seeks to earn the right for them to all the trappings of genuine realist talk. Price argues that Blackburn's local quasi-realism should be globalized because the general explanatory strategy quasi-realism uses to explain specific bits of language can be extended to all of our ordinary language and thought. Despite recognizing his view as a version of philosophical pragmatism, Blackburn rejects Price's invitation to defend expressivism in every area of discourse. Price's version of neo-pragmatism combines the endorsement of anti-representationalism, with a new kind of naturalism, which he calls subject naturalism - a naturalism that begins with a scientific study of human subjects, with our thought and language included. This alternative form of naturalism seeks to explain the meaning of each bit of language functionally and not semantically. This entails metaphysical quietism. 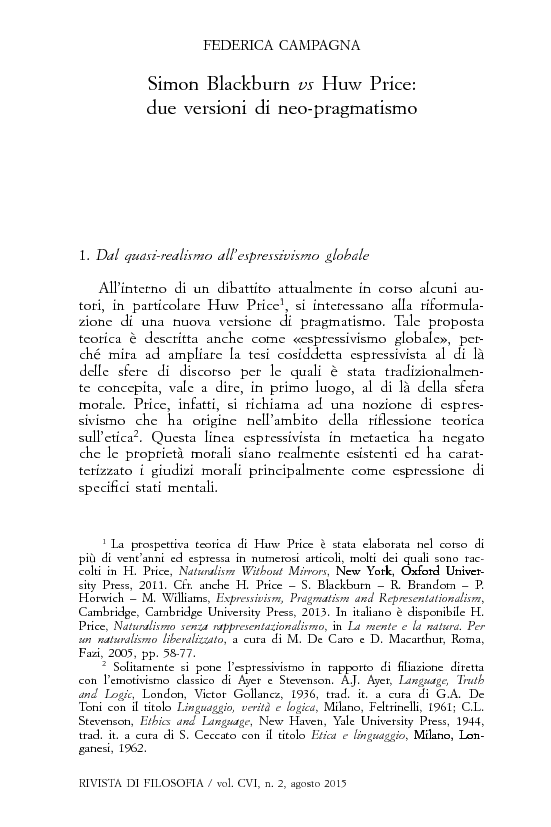