The philosophy of history was born in the Eighteenth Century, originated by the endeavour to outline an «universal history» alternative to the christocentric view of Augustine or Orosius or Bossuet, and related to the tripartition of the historical process in savagery, barbarity and civilisation. His main assumptions were the fundamental unity of the history of mankind and its interpretation as a (more or less) continuous «progress» - a progress towards the civilisation or (for Hegel) the realization of the Weltgeist. By the middle of the Nineteenth Century started the critique of these assumptions. Dilthey developed an epistemological critique, rejecting the possibility of the philosophy of history on the ground that the historical process cannot be known in its totality, but only in the individuality of its aspects, by means of the different human sciences. Burckhardt and Nietzsche refused the idea of progress: for Burckhardt the historical process is the domain of the three powers of state, religion and culture in their interplay and in their struggle; for Nietzsche it is marked by the loss of the spirit and values of the aristocratic society and by decadence to the «slave moral» of the mass society. The crucial turn was yet the «plural» conception of history as development of independent cultures or civilizations characterized by a common life cycle - from the birth to the decline or the disgregation - and by a different «symbolic world» (Spengler) or system of values (Toynbee). This «plural» conception opened the possibility of a comparison between the individual development of the different cultures/civilizations, between their life forms and periods. Afterwards the «comparative history» took as object also the modernization processes of the various European (and non-European) countries, considered from the viewpoint of the relationship between economic development and political regime. The next step was the rising of a «world history» (or «global history») which focuses his attention no more to the cultures/civilizations in their individuality, but to their relationships, to the encounters and conflicts inside the continents (e.g. inside Eurasia, for William H. McNeill) or between the continents (as the «Columbian exchange», for Alfred W. Crosby), to the formation of a worldwide capitalistic economy (Immanuel Wallerstein) or to the transition from the Chinese economic system to the new economic system created by the European expansion in Asia. In this perspective fell also the eurocentrism of the philosophy of history of Eighteenth and Nineteenth Century. The «global history» inherits its universalistic outlook, but not its philosophical assumptions. Because of this metamorphosis the history of mankind appears now as a complex process, lacking of unity as well as of a «direction» of development. 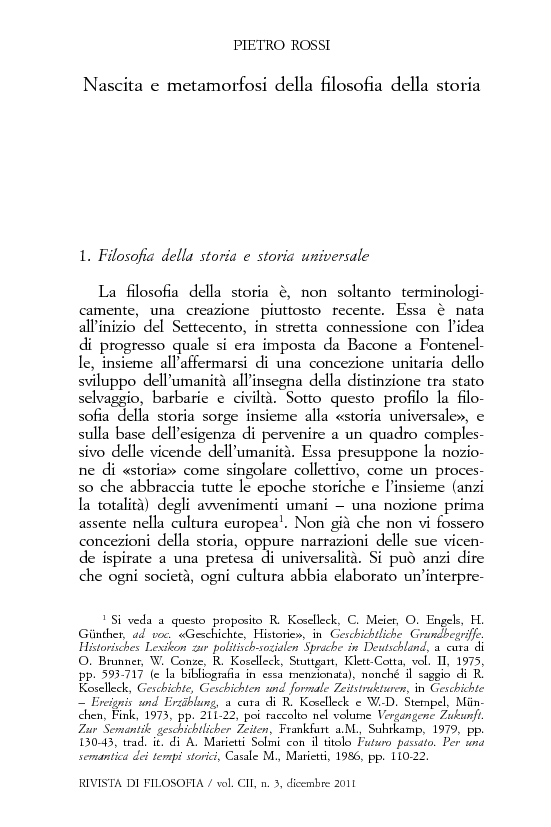