The essay offers an outline of Italian philosophical thought in the Sixties and Seventies of the past century, in the so-called "season of ideologies", a season characterized by the strong presence of mass parties on cultural scene. After the war Norberto Bobbio proposed a "politics of culture" against the cultural politics, in order to vindicate the autonomy of cultural work (and of philosophy) toward party politics: this was also the position generally shared by the "new Enlightenment" movement. On the contrary, the two major political parties - the Christian Democracy and the Communist Party - aimed at the conquest of cultural hegemony as mean of the conquest (or conservation) of power. The Communist party appealed to the Marxist theory, in particular to the version of the Marxism formulated by Antonio Gramsci and accepted it as its official doctrine. The Christian Democracy, devoted to the Catholic philosophical tradition, tried to defend the principle of the transcendence of God against the immanentistical perspective of the idealism of Croce and Gentile. But the overlap between Communist party and Marxism was far from being complete: beside the Gramscian legacy other forms of Marxism were present, and some Communists interested in the philosophy of science were no Marxist at all. Also the Catholic front was not compact, but divided into the supporters of the Neoscholastic position of the Catholic University of Milan and the followers of the "Christian spiritualism", a form of spiritualism deriving from Gentile's philosophy. The article follows the vicissitudes of Italian philosophy and its involvement in the political debates before and after 1968, up to the crisis of Marxism in the Seventies, and points out the mainly apologetic role of the Catholic thought in the same period. At the end of this season new perspectives arose, and the Italian philosophers gave up the critics of industrial society, suggested by the authors of the Frankfort school, and the utopist hope of a radical transformation of society. The political engagement decreased, and the "season of ideo-logies" was replaced by various postmodern forms of philosophy. 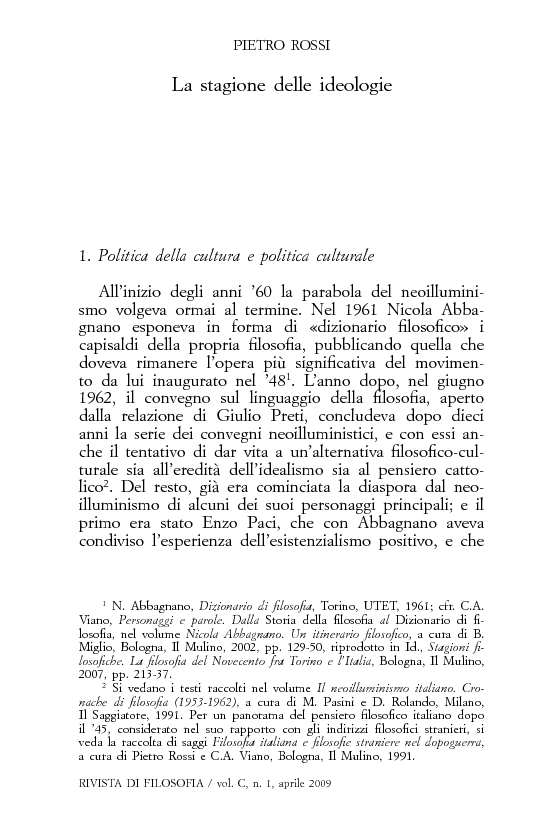