The essay analyses the development of Norberto Bobbio's thought from the interest in the philosophy of law to the formulation of a theory of politics. In his early studies, published in the Thirties, Bobbio defended the autonomy of the philosophical consideration of law against the positivistic tradition; in the following years his attention was more and more directed to the legal science, with specific reference to the problem of analogy and, more generally, of the juridical interpretation, the main theme of his lessons as professor of philosophy of law in Turin. Following Kelsen he became the main Italian representative of a positivistic theory of law, alternative to the natural right theory. After the war the interest for politics became prevalent: Bobbio supported the possibility of a "politics of culture" against the "cultural politics" of the Communist Party, and developed a strong interest in the methodology of political science. His participation to the activity of the Turin Center of Methodological Studies and to the "New Enlightenment" movement, the studies of the "classics" of the political philosophy, from Hobbes to Kant, Hegel, Marx, and of authors of political science as Mosca and Pareto, finally to Max Weber, are the crucial steps of a gradual approach to the philosophy and to science of politics. Since the Seventies the field of his studies became the theory of politics: a theory which combines the philosophical reflection with a scientific analysis of the modern political processes and, particularly, of the conditions of democracy in the contemporary society. 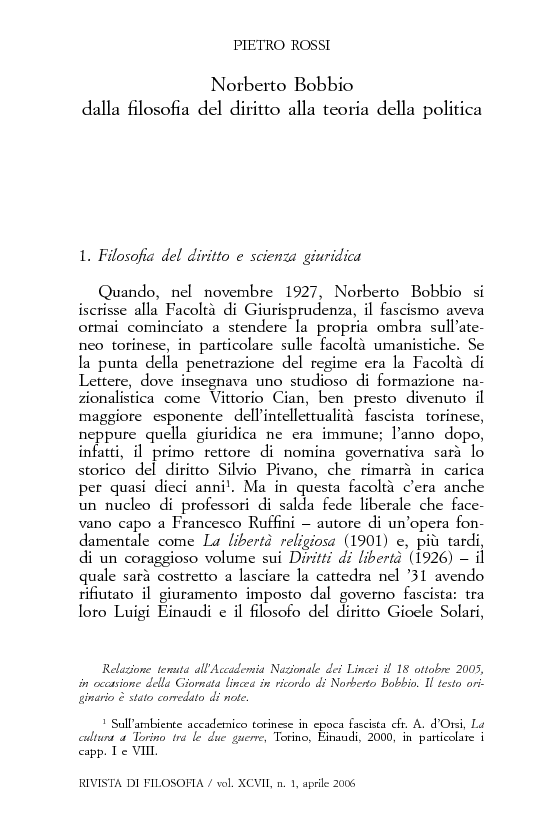