In the introduction to Political Liberalism, Rawls explains how the book is necessary in order to rectify the aspects of his theory which put its characterization of justice as fairness in contrast with a democratic society’s pluralism. The reasons for such incompatibility stem from the ideal of a well-ordered society as it is formulated in the third part of the theory of justice. Within such an ideal society, citizens accept the conception of justice as fairness on the basis of a single comprehensive doctrine, which Rawls conceives of as a general moral conception. On such a conception do rely our views on a number of issues – spanning from those on personal conduct to those on the functioning of a good society. This assumption of homogeneity, Rawls now comes to deem, is ‘unrealistic’, for it is incompatible with the (inevitably) pluralistic nature of a democratic society. What makes the ideal of a well-ordered society problematic, however, is not the simple predication that persons accept the principles of justice. Instead, the problem arises from the assumption that persons do so on the basis of the same comprehensive doctrine. By separating the theoretical substance of the theory from any single comprehensive moral conception which might underpin it – thus making it theoretically autonomous – the possibility arises that the very same principles of justice might be accepted by people who uphold different comprehensive doctrines, allowing for the establishment of a just society which is also stable in time under conditions of pluralism. The aim of this article is to challenge such a conclusion. Even though Rawls insists on the claim that Political Liberalism both, assumes and defends exactly the “same egalitarian conception of justiceµ as in Theory, there are good reasons to believe that not only the work falls short of justifying anything nearly as prescriptive as the second principle of justice, but also that Rawls is as a matter of fact aware of such shortcomings. In Political Liberalism Rawls comes to drop the psychological theses which grounded the theory of the good he exposed in Theory, by changing the way in which pluralism is conceptualized. The significant clefts which structure social disagreement now are not those between different conceptions of the good, but those among unreconcilably different views about the nature of the good, about what the good is. Once this is done, however, the pervasive redistributive instances required by Theory end up being unwarranted. 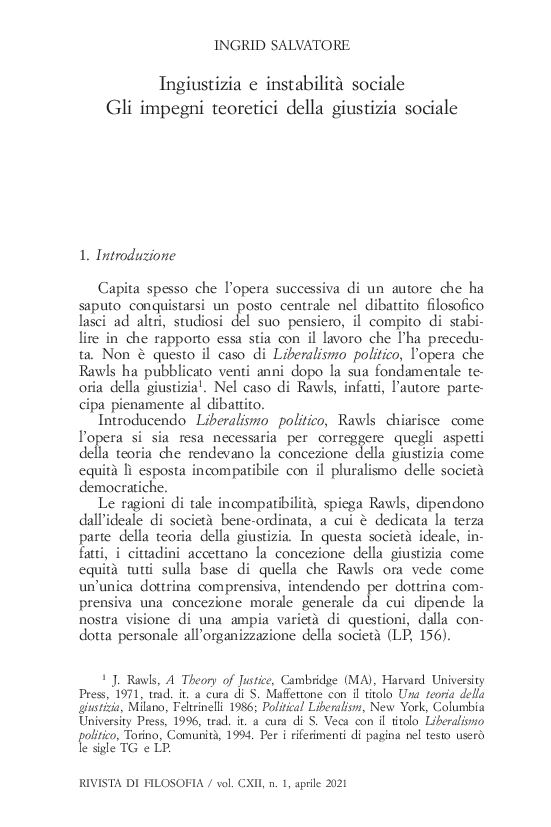